Previously: “Are you going to tell me where we are going?”

“No I think I will let you wonder.”

They stopped in Winslow for lunch at the Route 66 Diner. Winslow still had a lot of heritage left which made Chris really happy.

No amount of nagging would make Wyatt tell her where their side trip was going to be, he just smiled and shook his head.

It was very frustrating.

After good night’s sleep in Flagstaff all of a sudden it felt cooler and not quite as desert looking with big pine trees.  The town was very clean and also had a lot of heritage also.  Heading west on State Road 89 A. Sedona was only 29 miles away.

“Are you going to tell me yet where we are going?”

“Hold your horses,” Wyatt replied, “You will know soon enough it is not that far down the road.”

Season 12—Adventure 5—Vacations—Episode 9… Suddenly Chris could see these beautiful red mountains and the landscape definitely changed away from the desert, “That is breathtaking!” 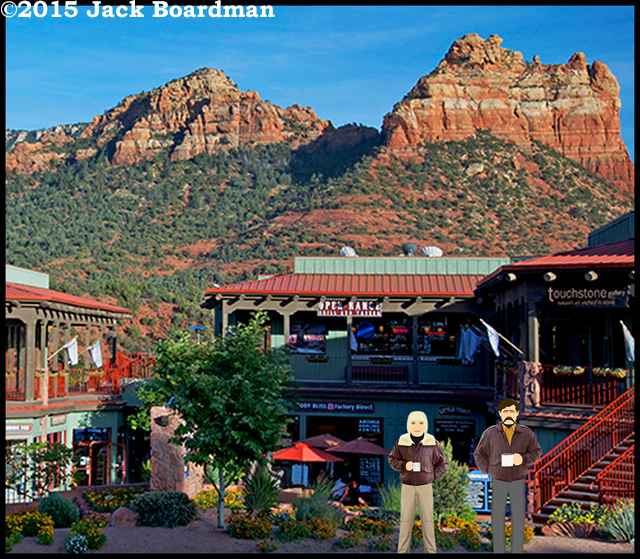 “I heard that it was and they were right,” Wyatt said, “It is called Sedona and we will spend the night here and explore.”

The town was beautiful big trees and a lot of shops. It was clearly a tourist place but there was so much excitement in the air.

“Look at that, Wyatt, there is a building that looks like it has been built right out of the rocks. It looks very modern and white to be tucked into the rocks!”

“That looks interesting let’s get a room and go explore the town.”

They stopped at “A Touch of Sedona Bed and Breakfast” because it looked like one could walk a lot of places. They found a town directory they discovered this was considered a very spiritual place with Vortex’s.

Chris read aloud from the pamphlet, The Energy of Sedona, “In addition to being a beautiful and serene place, Sedona has long been known as a spiritual power center. This is because the power that emanates from the vortexes produces some of the most remarkable energy on the planet. This energy is the reason Sedona is full of people who are ‘on the path,’ that is, people who have made a commitment to grow and become as much as they can spiritually. It is also the reason that such a large New Age community has sprung up in the Sedona area, bringing with it a variety of spiritual practices and alternative healing modalities, and it is the reason Sedona has sometimes been called a spiritual Disneyland.”

“We have personally found the energy centers at Sedona both exciting and growth inspiring. If you are at all sensitive to the more subtle things, the experience of standing at one of these vortexes, and letting the energy flow into you and through you, can be almost overwhelming. People come from all over the world to experience this.”

After exploring all the shops they shared a meal with the other people at the B&B.  The building on the rocks was called Chapel of the Holy Cross.  The two vortexes were called Cathedral Rock and Bell Rock.

The next morning after a good night’s rest they were on the road again headed for Kingman Az.

It looked like the next place that would have history of Route 66, “I would love to come back Sedona sometime and explore the vortexes.”

Chris thought that was a great idea, “Me, as well!”