After exploring all the shops they shared a meal with the other people at the B&B.  The building on the rocks was called Chapel of the Holy Cross.  The two vortexes were called Cathedral Rock and Bell Rock.

The next morning after a good night’s rest they were on the road again headed for Kingman Az.

It looked like the next place that would have history of Route 66, “I would love to come back Sedona sometime and explore the vortexes.”

Chris thought that was a great idea, “Me, as well!”

Season 12—Adventure 5—Vacations—Episode 10… Driving into Kingman they noticed it really was a clean town and the whole Route 66 was full of “Route 66” signs and it led to a big museum—where was a lot of memorabilia.

They did the things silly tourist do and bought themselves some shirts.

Looking for a place to stay on the main drag of the town—they saw something familiar—and exclaimed in unison, “Jingles!”

Laughing Wyatt said, “Andy Devine was in more than just The Adventures of Wild Bill Hickok with Guy Madison that’s what most people remember, but he also was in several John Wayne cowboy adventures in the 30s and 40s”

They found a spot at a motel on Andy Devine Avenue—naturally!

The next morning they headed for the town of Oatman, CA—following the Route 66 road proved quite a challenge, as it was all gravel with many dips and turns.

There were also fenced off gold mines with big warnings about trespassers.

When they arrived in Oatman, they found it a bit comical—there were burros running all over town & sticking their heads in car windows.  This was most defiantly a tourist town but it looked fun.

All of a sudden they heard gunshots.

Wyatt looked concerned until they noticed a man all dressed in black wearing a badge tell another man to surrender—the bad guy says “never” and turned around to draw—but of course the marshal wins the gunfight.

“I don’t think so,” Wyatt replied.

“Well we are on the last leg of this trip,” Wyatt said, “I have never been in California so this is going to be nice. I really want to swim in the Pacific Ocean!”

Staying in Needles for the night this small town did offer a little bit of Route 66 history and touted itself as the hottest place on earth.

“I do not think I would like to be known as that.” Chris said

Getting anxious now for the end they just kept driving.

They drove through LA—the traffic on the California Freeway was—beyond busy!

Suddenly there it was—The Santa Monica Pier!  They parked and walked toward the pier and there it was.

Chris was jumping up and down with joy. “Look Wyatt look the sign…there is a sign! I feel completed! At last I feel the accomplishment we have made!”

Wyatt was laughing at her so hard people were stopping to stare—neither of them cared. 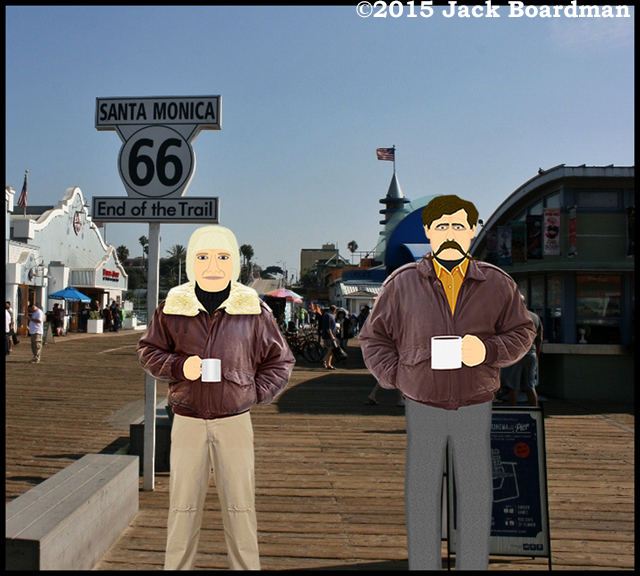 They got a room as close to the beach as they could and changed into their beach gear.

Wyatt was like a little kid and Chris smiled at him.

They put their towels out on the sand and ran hand in hand to the water.  Not stopping to test or anything they jumped right in! Like little kids they splashed and played. It was glorious

They stayed two days before climbing back in the car for the trek home.  Sunburned and still laughing they headed up California Highway 1 towards Oregon. 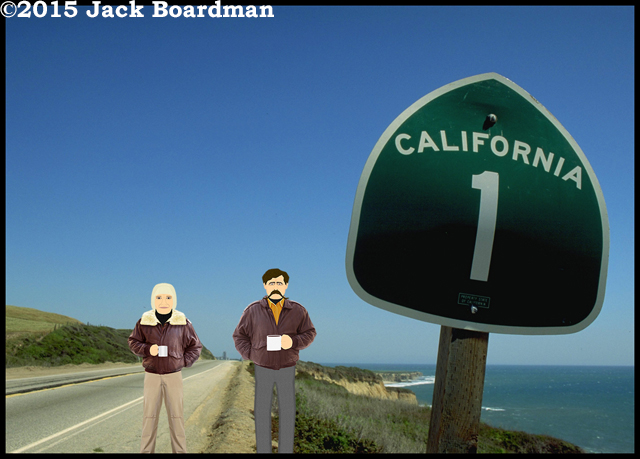 California Highway 1 was a fun road to travel with glimpses of the ocean all the way up. In the bay area they decided to skip Oregon and crossed over the Oakland Bridge and headed towards Reno.

As soon as they crossed into Nevada—Chris got really quiet. She was feeling very strange emotions.

It went on for several hundred miles—even when they stopped for lunch in Winnemucca she remained very quiet.

Wyatt was getting concerned, “What is going on with you?  Are you OK?”