Posted on September 9, 2015 by Jack Boardman

Previously: They spent the night in Salt Lake City and discovered they could not get a drink except a beer without paying a membership fee to a private club.

The city was surrounded by big mountains and was in a bowl that held in a lot of smog and stuff in the air.

They decided they were through with vacation and were anxious to get home—and didn’t stop again except for gas and food and take turns driving while the other slept.

Two and a half days later they arrived in Owatonna, Minnesota, where they stopped to fuel the old Pontiac and grab a bite to eat.

After a relatively relaxing meal, they drove back onto I35 and headed north.

Season 12—Adventure 5—Vacations—Conclusion… At the Tardis Tavern™—Paul and Archie awaited the return of Merle and Carl McIntyre—they’d been sent out on a mission to find Spiced Rum and a rich Black Ale for Chris & Boomer, respectively.

Just about the time their patience was beginning to wear thin—Merle and Mac arrived, grinning broadly, “We found sources for both!” 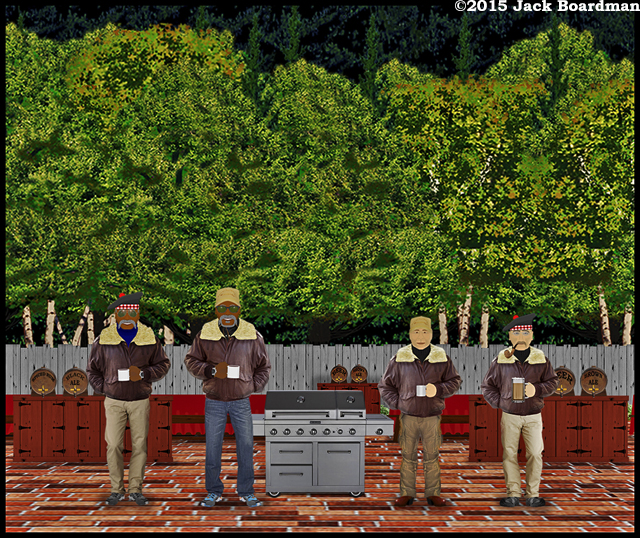 “We did,” Mac added, “But not without a lot of persuading. Finklestein Custom Ale was more than a little reluctant to provide kegs for us—preferring to keep their product in-house.”

“Ach—and how lads, were ye able to overcome tha?”

“Bad Weather,” Mac replied, “But they’re too busy establishing themselves in St. Paul. And too, we don’t have license on this blog to use their product. Finklestein’s is pretty good ale and more importantly—it doesn’t rely on hops to cover brewing errors—just like Bad Weather.”

“Will Boomer notice the difference?” Paul was concerned.

“He might,” Mac grinned, “But he won’t complain—we have NO black ale now.”

“We enlisted Cujo’s help with that—she went back in time to Gravesend, England in the year 1638,” Merle replied, “And she obtained several kegs of ‘Spiced Rum’ for us.”

“Now, don’t that just beat all!” Archie exclaimed, affecting a down-home accent, “I reckon we oughta have a taste—jus t’see if it’s fittin’ fer our establishment.”

About the same time—our vacationing heroes began to arrive…

Sarah & Jay were on final approach to land at Danger Bay Airfield—they would stop at home to make sure the girls were doing well—they trusted they were—but it WAS the parental thing to do! As soon as they walked into their house, “Honestly, Mom, we’re fine!”

Chris & Wyatt were on Historic US 61, a mere ten miles south of Danger Bay, “I wonder if Cujo has located Christine and Lacy?”

“I HOPE Paul has obtained spiced rum,” Chris grinned, “That would make the Tardis Tavern™ perfect!”

Linda & Ralph landed at Danger Bay Airfield shortly after Sarah & Jay, and they hurried home to freshen-up before heading for Tardis Tavern™—AND to make sure cousin Boomer was aware of what day it is—he’s known for forgetting the day of the week—ya know!

Thus ends Adventure 5…But our story? To be Continued…

8 Responses to The Vacations’ end!