Know when to walk away

Previously:  It was Lacy who came-up with the idea—after a lot of number-crunching, “Let’s have one big winner a day. That won’t hurt us financially, but it will help business by drawing more gamblers—all of whom expect to be the big winner.”

Slowly, as Christine thought about her granddaughter’s suggestion, she came around, “I see—we make a little less profit off each customer—but the lure of a big-money win will bring in more suckers—er—customers. Good idea!”

Lacy’s plan worked just as she imagined it would—sure, it would take longer to make large profits—but no one would accuse them of cheating.

A month later—in Saskatoon, Saskatchewan… “I know where they are!”

“Where, Cujo?” Chris asked a she casually stroked her .44.

“No,” Cujo replied, “Almost all of you are known on sight by the Daltons—I have two in mind they don’t know.”

“Yes, Paul,” Cujo smiled, “You and Archie. You’re the only two of your number whom they haven’t seen—now to teach you how to cheat at Blackjack without getting caught…”

“Ach! Is this even possible? Ay kinna even cheat at cribbage!”

“WHO do you think REALLY came up with those lyrics, Chris?” Cujo asked.

By the time Cujo was done—they knew more about gambling than even the fictional “Hannibal Hayes” of the 70s TV series “Alias Smith and Jones.”

Two days later Paul & Archie arrived at O’Rourke’s Drift… and were asking the station master about the town, “We’re looking for lodging, my good fellow—and we understand there’s an honest gambling establishment here—can you help us?” 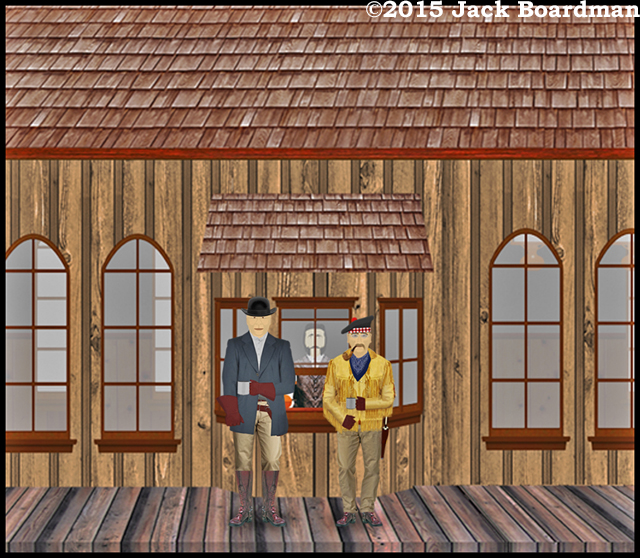 “You can find lodging at ‘tent city’ at the north end of town—and honest blackjack at Clark’s Pub, right in the middle of town,” he replied, sizing them up as a couple of foreign losers—who would leave in a day or two—broker—and perhaps—wiser. That is EXACTLY what they wanted him to think.

6 Responses to Know when to walk away