Previously:  Two days later Paul & Archie arrived at O’Rourke’s Drift… and were asking the station master about the town, “We’re looking for lodging, my good fellow—and we understand there’s an honest gambling establishment here—can you help us?”

“You can find lodging at ‘tent city’ at the north end of town—and honest blackjack at Clark’s Pub, right in the middle of town,” he replied, sizing them up as a couple of foreign losers—who would leave in a day or two—broker—and perhaps—wiser. That is EXACTLY what they wanted him to think.

Season 12—Adventure 6—Saskatchewan! Episode 6… The station manager was now also employed by the Daltons, and would quickly tell them of new arrivals—and he did just that—without another train due in until morning—he scurried over to Clark’s Pub and told the “Clarks” of the new arrivals—a couple of gambler wannabes, one English and the other Scots. Lacy “Clark” thanked him with a fiver, and sent him away.

“A couple of dandy-losers will be visiting soon, Gramma.”

“We’ll see that they win just enough to keep them coming back,” Christine’s mind was elsewhere—this was not lost on Lacy.

“We need some law and order in this town.”

“Certainly—we’ve established that an honest gambling-house can make money,” she smiled, “Now we need to add a town constable to make our citizens comfortable. I know just who we should hire.”

Lacy thought for a moment, “You want to hire that ex-Mountie, Carruthers! I noticed you seemed sweet on him.”

“Yes—even an old crone like me requires certain—how shall I say this? Ah—services. Oh—and while we’re on the subject—you need to decide which of your too-many suitors you want—permanently.”

The following day—Town Constable Henry Carruthers made his first appearance at Clark’s Pub, to meet Lacy and to be introduced to the Pub’s staff. 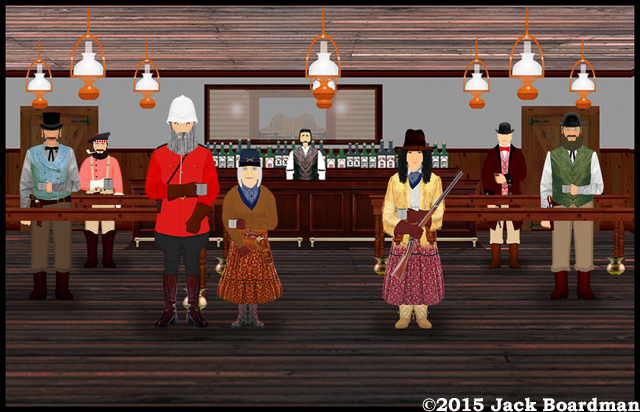 Introductions were made, and all were impressed by this 75-year-old ex-Mountie—extremely fit and energetic for a man half his age. They could also see the strong affection Christine showed for this gentleman—all approved.

For her part, Lacy was very happy for her grandmother—but far less happy with the admonishment that she should settle on only ONE of her suitors.

She liked her situation—playing with the affections of several fine male specimens.

But it also caused problems—every now and then it would result in fights between her suitors—and could cost the gang the life of a perfectly good member.

Lacy had a lot to think about.