Previously: Gone was the companion pledge they had made to each other. The pledge that they would always step aside if Lacy chose one or the other.

For over a year Lacy had not picked and had continued to have her pleasure with the two cowboys.

Sometimes she kept each one with her for a week or so and then switched.

The strain on Edward and Arturo’s friendship had finally reached a boiling point.

They were in the gunfighter stance, hands positioned on their guns.

The air was alive with electricity and male hormones. Death would wait 10 seconds more.

Lacy, not thinking in this emotional state ran to try to stand between them to stop this madness.

Shots were fired and both men stared in horror as Lacy crumbled to the ground.​

Season 12—Adventure 6—Saskatchewan! Episode 8… Lacy awoke screaming and shaking all over, she screamed so loud that Edward jumped out of bed grabbing his gun.

“What is it Lacy? Did you hear something?”

Lacy thought Edward looked pretty silly with the moonlight bouncing off his naked body holding his gun and looking fierce. Not being in a joking mood Lacy snapped at him, “Put your clothes on and get out. I have some thinking to do.”

Edward looked confused and hurt. Lacy never made him leave in the middle of the night. She liked having his body close to her. “What did I do wrong? Is there anything I can do?”

“Yes,” Lacy snarled, “Just what I said—put your clothes on and get out.”

Edward dressed quickly without saying another word.  He looked at Lacy and could tell she was shaken but at what? He left quietly shutting the door softly.

“Damn Christine,” Lacy said aloud after Edward was gone, “You put these thoughts in my head.”

“Could she be right? Was my dream a preview of what could come?  Would Edward and Arturo really become that angry at each other over her?”

She had some decisions to make!

Two days later she sat down in the bar… with both Edward and Arturo.

They sat together and had a couple of drinks relaxing more by the minute which was what Lacy was hoping.

“Boys,” she started the conversation, “I have enjoyed my times with each of you. Make no mistake it has been wonderful and I could not ask for better companions but it ends today. I want no arguments you did nothing wrong but I am kicking you out of my bed.”

She stood up smiled at both of them, “Thank you and stay and have a couple more drinks.” 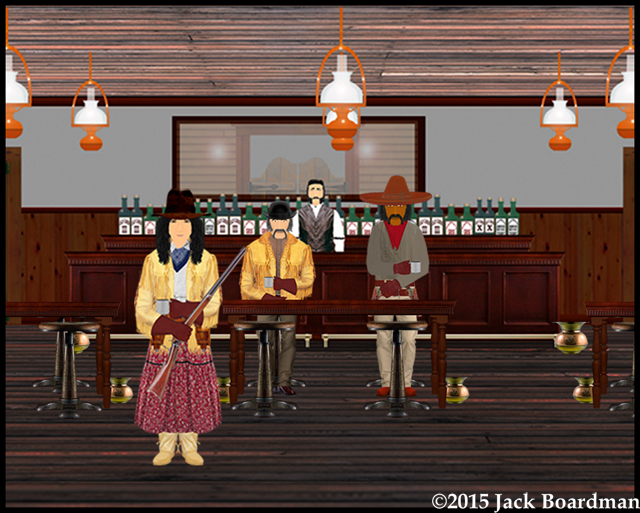 Edward and Arturo watched her leave without saying a word. They were shocked at this turn of events, but knew she meant it and would not be changing her mind.  They looked at each other and clicked their glasses glad their friendship was still intact.

MEANWHILE—Aboard the Adventure Train… Inspector Robert Erik MacIntyre outlined his plan, “The RCMP will remain aboard the train as we are just a bit too obvious in appearance…”

“Gee, Inspector, your grasp of the obvious,” Big Mac cracked-wise.

“Indeed,” MacIntyre continued, “With Chris in command, I would like the marshals to debark the train about twenty miles south of the village of Dalton and move carefully towards the village—I suspect Christine and Lacy Dalton have their associates encamped there. The ticket clerk in O’Rourke’s Drift is an informant—the Daltons are there using the name ‘Clark’ as an alias.”

“Very-well, Inspector,” Chris was pleased at being given an opportunity to command an operation—and she wanted to get it right, “What are our orders?”

Soon the marshals were 20 miles South of Dalton, with Flutters flying high cover. They were moving slowly—as if they were in no particular hurry, just riding along. 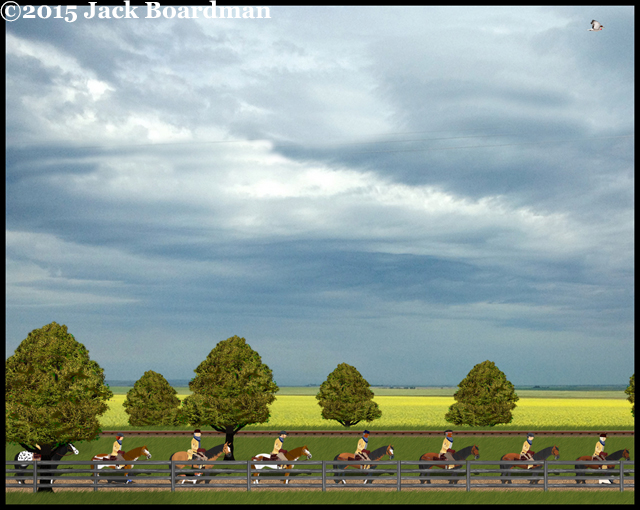 Sarah, Jay and Boomer were riding together, “Will Chris draw and shoot first—then ask questions?”

“I don’t think so, Boomer,” Sarah laughed, “It’s true, she has an itchy trigger-finger, but you have to know she will temper that with her common-sense.”

“You know I was teasing.”

A little closer to the front of the column Linda was practicing her quick-draw, “Be careful, I’d rather not get any holes in my buckskins.”

“Ralph!” Linda laughed, “I’m not drawing back the hammer!”

Hour after hour they continued their journey and their conversations dwindled. The monotony was eventually broken when Flutters rapidly returned, “RIDERS—A LOT OF RIDERS—DEAD AHEAD!”

Blogger and Internet Marketer. I live in the middle of the Mojave Desert. Love helping people obtain freedom in their lives. Both personal and financial .
View all posts by Chris Shouse →
This entry was posted in Pioneer Canada, Season 12, Season 12—Adventure 6—Saskatchewan! and tagged Computer Art, Fiction, Photoshop Art, Pioneer Saskatchewan, Serial Melodrama. Bookmark the permalink.