“Didn’t that make you curious?”

Previously: The riders stopped to continue their discussion—which soon devolved into a shouting match.

“Arturo is an idiot—he’s sent us out before, and we found nothin’!”

“Maybe they stopped, or maybe they turned on to the fork up ahead a mile or so?”

“I reckon we can ride to the fork and see.”

At Chris spoke, the sentient horses quickly rose to their feet—and the riders froze momentarily in surprise. They outnumbered the marshals 11:9, and made the decision to reach for their guns.

That was a truly bad idea.

Season 12—Adventure 6—Saskatchewan! Episode 10… In seconds, all eleven were lying dead on the ground—not exactly the outcome the marshals wanted. The overall idea was to capture some alive—and turn them over to the Mounties on the train.

Contrary to the old TV westerns—it was difficult to just shoot the guns out of the bad guy’s hands or to just wound them. As bad luck would have it—they all perished.

They dug eleven graves and buried the unfortunate outlaws—it was, after all, the right thing to do. The outlaws’ horses began heading for their stable in Dalton; which will cause a stir with their friends.

Chris suggested they ride along the railroad tracks until they were well ahead of those horses, and then return to the road. She reasoned that would appear as though they were past the place where the outlaws met their fate.

Jay Cooper suggested they not go directly to town, but set up camp a few miles short of town.

All the marshals, except Wyatt and Chris, set up their campsites on the prairie, while they intentionally set up camp close to the road. 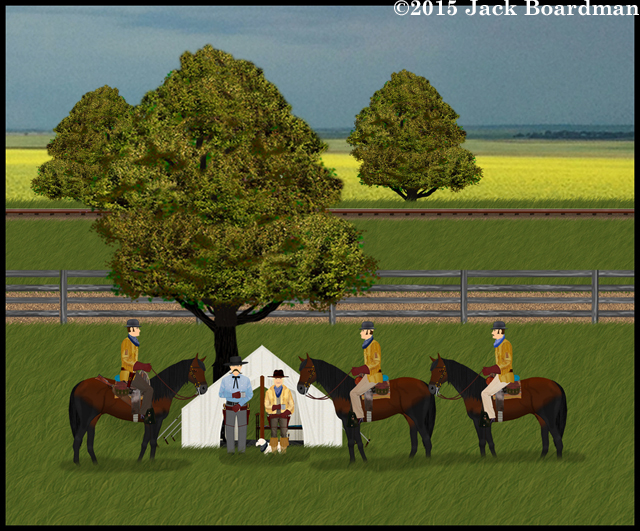 It wasn’t more than an hour before Wyatt and Chris were confronted by three riders, “You folks seen any riders pass by on the road?”

“No riders,” Wyatt replied, “Just some saddled horses walking by.”

“Yes, of course,” Chris replied, “But we figured it might have been the distant gunfire we heard an hour or so before we saw the horses. It wasn’t something we wanted to get involved in.”

“What are you doin’ here, anyway?”

The guy’s voice had a threatening tone.

4 Responses to “Didn’t that make you curious?”