Both Boomer and I have made our introductions, now I am requesting brief introductions (“brief” is relative—use as many words as you require) from both Chris and Linda.

It would ALSO be great if we could find some more REAL WORLD conservative members to add to our crew.

Or those willing to add voice to our in-house cyber-conservatives—I will make that effort to fairly present a conservative viewpoint, without making the character a caricature. I’ll pick one the characters to voice.

I’m asking Boomer to do the same.

I have to believe that in Danger Bay, at least, people will not resort to the odious name-calling we see on the web today.

I’ve also asked Boomer to redesign the Cyber Café to be a little smaller and feature the characters involved in the morning’s conversations. The two images in this post are what he submitted to me. 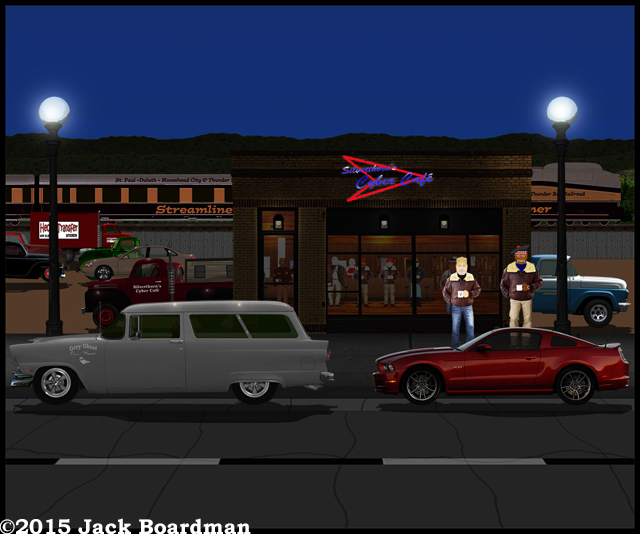 The first is the outside view of the café, where we stop to chat before going inside—the second is the inside featuring Blanche, queen of the breakfast counter (she’ll take your order and cook it up in a flash). It’s not that she’s apolitical—she’s more interested in what you have to say, “Honey.”

Hovering around the café, talking-up customers is James Silverthorn III, the café’s manager, and typical of the rest of his family makes everyone feel welcome. His grandparents, Hiram and Kiwidinock (Kiwi) Silverthorn are very-proud of this young man.