All the marshals, except Wyatt and Chris, set up their campsites on the prairie, while they intentionally set up camp close to the road.

It wasn’t more than an hour before Wyatt and Chris were confronted by three riders, “You folks seen any riders pass by on the road?”

“No riders,” Wyatt replied, “Just some saddled horses walking by.”

“Yes, of course,” Chris replied, “But we figured it might have been the distant gunfire we heard an hour or so before we saw the horses. It wasn’t something we wanted to get involved in.”

“What are you doin’ here, anyway?”

The guy’s voice had a threatening tone.

Season 12—Adventure 6—Saskatchewan! Episode 11…“That’s mostly our concern, stranger, but since you asked so politely,” Wyatt’s tone—sarcastic, “We’re on our way to O’Rourke’s Drift. We heard there was an honest blackjack game going on there.”

The guy’s voice changed—becoming a bit more civil, “Oh, you should enjoy that place.”

An hour later—Chris asked Boomer, Jay and Sarah to ride towards Dalton, gave the rest orders to do the same—about an hour apart.

It was dusk when Boomer, Jay and Sarah entered Dalton. They didn’t notice the three people standing at the far end of town—unfortunately. 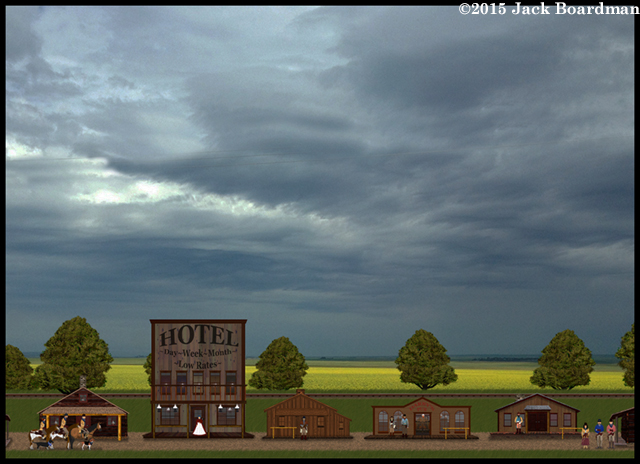 Lacy Dalton DID notice them, “Boys? I need you to convince those folks to leave town—kill them if you have to.”

She quickly went into the cabin, and the two motioned to the big fellow standing at the building next door to join them. The three of them walked towards the undercover marshals.

“Uh-oh,” Pepper’s ears picked-up their conversation, “We got trouble! Those guys are coming to order us out of town—reinforced by their guns.”

Boomer, Jay and Sarah un-looped their sidearms (the guns are secured to the holsters by a rawhide loop over the gun’s hammer), as they rode closer. All their senses were on high-alert; any twitch by their adversaries would result in three .44s clearing-leather.

The men walked slowly, ominously, and with a touch of swagger—knowing they had the advantage of being on foot—a far steadier platform than atop a skittish horse. What they could not know: Sentient horses are not skittish—they live for battle. They are the finest warhorses who have ever lived.

As they walked-up, the big guy was the first—and only one who had a chance to—speak, spoke, “You folks need to leave town—now, or die.”

10 Responses to The finest Warhorses