Previously: “Uh-oh,” Pepper’s ears picked-up their conversation, “We got trouble! Those guys are coming to order us out of town—re-enforced by their guns.”

Boomer, Jay and Sarah un-looped their sidearms (the guns are secured to the holsters by a rawhide loop over the gun’s hammer), as they rode closer. All their senses were on high-alert; any twitch by their adversaries would result in three .44s clearing-leather.

The men walked slowly, ominously, and with a touch of swagger—knowing they had the advantage of being on foot—a far steadier platform than atop a skittish horse. What they could not know: Sentient horses are not skittish—they live for battle. They are the finest warhorses who have ever lived.

As they walked-up, the big guy was the first—and only one who had a chance to—speak, spoke, “You folks need to leave town—now, or die.”

Season 12—Adventure 6—Saskatchewan! Episode 12… They really never had a chance—they were dead before they hit the ground—one from being struck by the big warhorse, Pal’s hoof—two from gunfire. When threatened with death—even the most reluctant-shooter among the marshals will shoot—such is the friendship shared by these three. 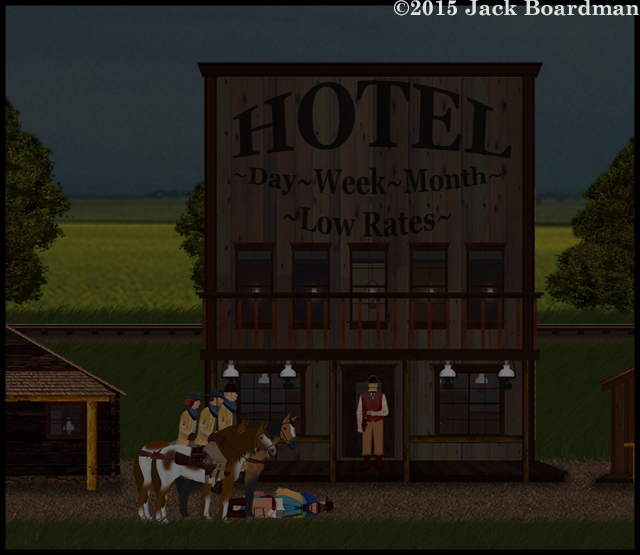 The citizens of Dalton—at least those who witnessed the showdown, were of mixed-emotion—some merely shrugged and returned to going about their business. Others took satisfaction in seeing the bullies—for that is what they were—bullies, taken-down. Still others were outraged; but kept their outrage to themselves. At least until they got into the local pub.

The town doctor, also served as the undertaker, hitched-up his buckboard, and with the help of a couple of friends, collected the dead for burial in the local cemetery.

There would be no graveside mourning. Nobody cared—that’s life (and death) in a frontier town.

Lacy Dalton observed all this through the window of the cabin, and wondered if the three might be looking for employment—she didn’t recognize them from Fort Justice. That was fortunate for the marshals—she could quite easily have picked them off from inside the cabin with her Winchester 73 (she was that good with a rifle).

“So, what now, gentlemen?” Sarah asked.

“I reckon we should have a drink in yonder pub,” Jay drawled, “Isn’t that what the heroes did on TV?”

“I wonder if the pub serves wine?”

9 Responses to No chance…