For the right price

Previously: There would be no graveside mourning. Nobody cared—that’s life (and death) in a frontier town.

Lacy Dalton observed all this through the window of the cabin, and wondered if the three might be looking for employment—she didn’t recognize them from Fort Justice. That was fortunate for the marshals—she could quite easily have picked them off from inside the cabin with her Winchester 73 (she was that good with a rifle).

“So, what now, gentlemen?” Sarah asked.

“I reckon we should have a drink in yonder pub,” Jay drawled, “Isn’t that what the heroes did on TV?”

“I wonder if the pub serves wine?”

Season 12—Adventure 6—Saskatchewan! Episode 13… There were but two other customers in the pub as the marshals walked-in, “Mighty quiet for this time of day.”

“Everybody went outside to see the gunfight,” The bartender replied, “And only Caleb and Eustace returned after it was over. Did you see it?”

“You were in it,” Eustace said, “That big stallion took-out Abraham with a flick of his hooves.” 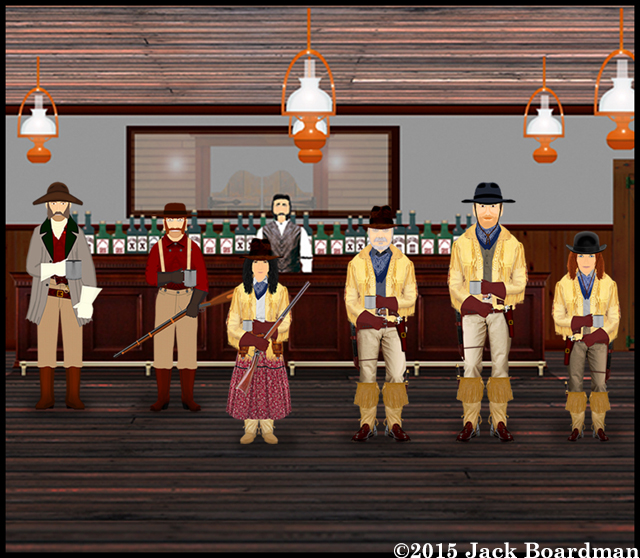 “It’s a shame that had to happen,” Boomer sighed.

A small woman carrying a large Winchester silenced the conversation as she walked into the pub, “Dang, Sarah, she’d be a dead ringer for you—if it weren’t for the black hair.”

“That was some shoot-out,” the woman remarked, “Name’s Clark, Lacy Clark. Would you be looking for work?”

All three marshals were surprised she didn’t recognize them.

“We might be—for the right price,” Sarah replied, “And what you want us to do.”

“What you just did out there on the street, occasionally—as needed. But mostly, keeping your eyes open and observing,” Lacy smiled.

“We’re not killers-for-hire,” Boomer frowned, “We were defending ourselves.”

“My grandmother and I run a blackjack gambling pub in O’Rouke’s Drift—providing a place for folks to gamble without the house cheating them,” Lacy replied, “But there are always people who lose, and they sometimes get angry—VERY angry about it. We need people who can figure-out quickly how much of a threat those people really are.”

“We’ll think about it,” Jay said, “And get back to you in the morning—we need to sleep on it.”

“How about breakfast at the hotel?” Lacy asked, “A little bribery?”

8 Responses to For the right price