“Who DOES your hair?”

Previously: “We might be—for the right price,” Sarah replied, “And what you want us to do.”

“What you just did out there on the street, occasionally—as needed. But mostly, keeping your eyes open and observing,” Lacy smiled.

“We’re not killers-for-hire,” Boomer frowned, “We were defending ourselves.”

“My grandmother and I run a blackjack gambling pub in O’Rouke’s Drift—providing a place for folks to gamble without the house cheating them,” Lacy replied, “But there are always people who lose, and they sometimes get angry—VERY angry about it. We need people who can figure-out quickly how much of a threat those people really are.”

“We’ll think about it,” Jay said, “And get back to you in the morning—we need to sleep on it.”

“How about breakfast at the hotel?” Lacy asked, “A little bribery?”

Season 12—Adventure 6—Saskatchewan! Episode 14… The marshals met Lacy outside the hotel shortly after sunrise, “I wasn’t sure you’d show-up—this is my associate, Reginald Smith.” 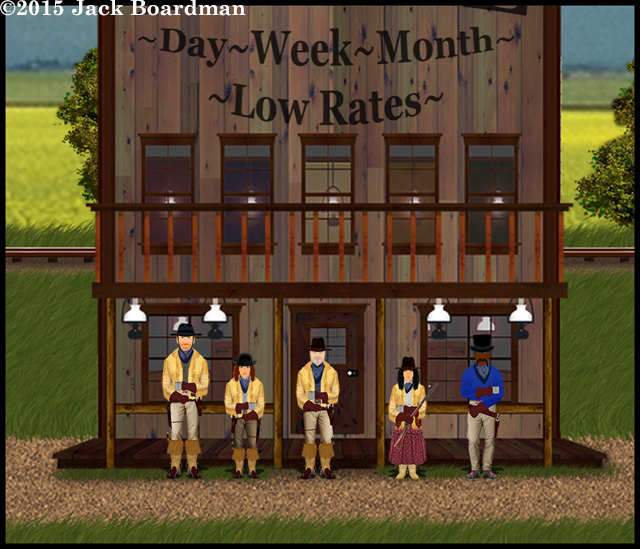 “We were much too curious as to what, exactly you had in mind,” Sarah grinned, “By the way—who DOES your hair?”

“I’m not sure whether I should just shoot you—or tell you,” Lacy laughed—correctly interpreting Cooper’s remark as humor, “No one—I just let it do what it wants to after I brush it and stuff it under my hat.”

“That works for me as well,” Boomer removed his hat revealing a closely cropped balding head, “See?”

Jay looked at the smirking Reginald, and quipped, “What’s with these women-folk?”

Boomer’s Remington .44 was drawn and pointed at Mr. Smith before the comma appeared at the end of his rejoinder, “Smile when you say that, Reggie!”

Sarah and Lacy entered the hotel, followed by the boys—Lacy whispered to Sarah, “Is your friend Boomer always that forgetful?”

“Oh Lacy, Boomer didn’t forget to draw back the hammer…”

Lacy thought about what just happened and marveled at how well these three related to one-another—their easy unscripted banter—their obvious close friendship—and total lack of rivalry between them, informed her that these are people she does not want opposing her. Couple that with last night’s shootout where they quickly defeated three of her best gunfighters—she would keep all that in mind as they negotiated over breakfast.

4 Responses to “Who DOES your hair?”