“What about the rest of us?”

PREVIOUSLY: Lacy thought about what just happened and marveled at how well these three related to one-another—their easy unscripted banter—their obvious close friendship—and total lack of rivalry between them, informed her that these are people she does not want opposing her. Couple that with last night’s shootout where they quickly defeated three of her best gunfighters—she would keep all that in mind as they negotiated over breakfast.

Season 12—Adventure 6—Saskatchewan! Episode 15… Of course the “strangers” would be Chris, Wyatt, Big Mac, Merle, Paul, Archie, Ralph and Linda, who collectively noticed the five people having breakfast, and after checking-in, met in Chris and Wyatt’s room, “We know she’s seen me, as I filled-in at the Fort Justice railroad station, so I’d better lay-low.” 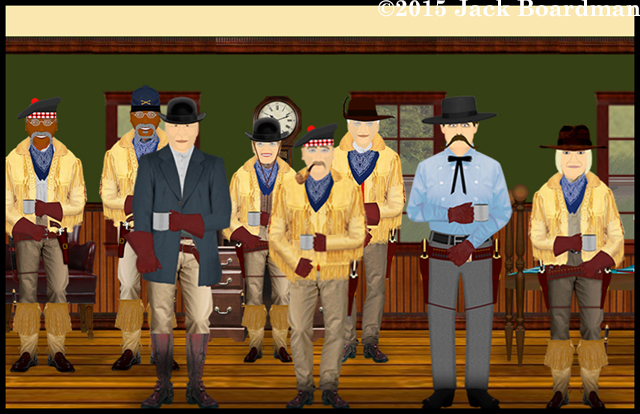 “You’re right, Ralph,” Chris agreed, “I think they may also have seen the McIntyre brothers. Paul, Archie, Wyatt and I will try to finagle our way into Lacy’s new gang. First thing tomorrow morning the rest of you check-out and ride to O’Rourke’s Drift—I’m told there is a tent-town just north of the main town. Set-up camp there and mingle with the residents.”

“Maybe, Chris,” Wyatt suggested, “We should go downstairs and ‘notice’ our friends meeting with Lacy.”

“Dangerous—but I think it may just work, just the two of us for now.”

“What about the rest of us?” Paul asked.

“In about a half-hour, the rest of you—save for those who we suspect would be recognized—start coming-down to the lobby and take your cues from Wyatt or me.”

Chris and Wyatt walked in to the lobby, and feigning surprise, stopped at Lacy’s table, “We didn’t know you were in-town, you bald-headed excuse for a highwayman—howareya, Boomer?”

“Still dressing like a dandy, eh, Wyatt?” Boomer replied, “Lacy, I’d like you to meet two of the ugliest, gutter-wallowing, no-account drifters I’ve ever had the displeasure of knowing, Kid Wyatt, and Calamity-Chris.”

Lacy looked at Boomer, “Based on your greeting, I suspect these are friends?”

“Well—if because of these two no-accounts we once got chased out of Wichita, Kansas by Wild Bill Hickok himself—then yes.”

“By all means, then—pull-up a table and join us,” Lacy was now thinking she could replace some of her gang—those she had come to realize she could no-longer trust, “Good to meet you two.”

An hour later—with the additions of Paul and Archie—Lacy had expanded her gang significantly—with dangerous people she believed she could trust.

She had some house-cleaning to do—and these were the people she’d task with that job.

A job they were quite willing to take-on—but not for the reason she believed.

6 Responses to “What about the rest of us?”