Lacy is no one’s fool

PREVIOUSLY: “Still dressing like a dandy, eh, Wyatt?” Boomer replied, “Lacy, I’d like you to meet two of the ugliest, gutter-wallowing, no-account drifters I’ve ever had the displeasure of knowing, Kid Wyatt, and Calamity-Chris.”

Lacy looked at Boomer, “Based on your greeting, I suspect these are friends?”

“Well—if because of these two no-accounts we once got chased out of Wichita, Kansas by Wild Bill Hickok himself—then yes.”

“By all means, then—pull-up a table and join us,” Lacy was now thinking she could replace some of her gang—those she had come to realize she could no-longer trust, “Good to meet you two.”

An hour later—with the additions of Paul and Archie—Lacy had expanded her gang significantly—with dangerous people she believed she could trust.

She had some house-cleaning to do—and these were the people she’d task with that job.

A job they were quite willing to take-on—but not for the reason she believed.

Season 12—Adventure 6—Saskatchewan! Episode 16… The house-cleaning began before they left Dalton—the only ones to survive were Lacy’s special friends—you know who I mean—GENTLE READER—right?

Leaving those “special friends” behind in Dalton to continue the purge as they deemed necessary, Lacy and her new house-cleaners began the journey to O’Rourke’s Drift. 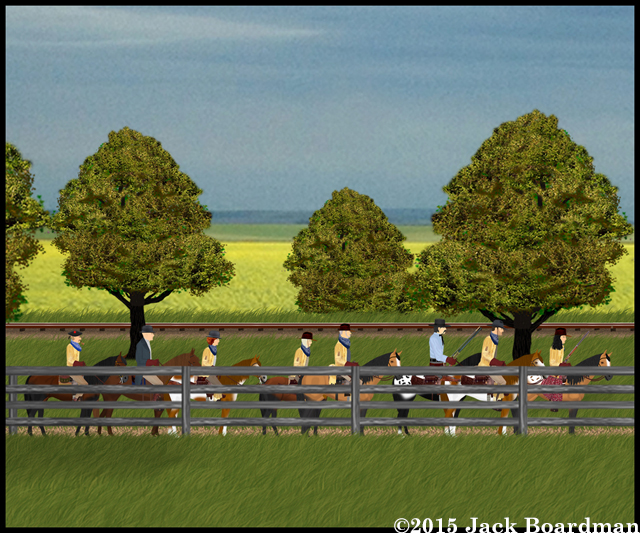 She hadn’t been in touch with her grandmother Christine for days—she hoped all was well there and was anxious to find out how things were going. Life was easier for her when they were outlaws—she knew what to expect—and how to handle it. This business of feigning honesty was far more difficult than she’d imagined it would be.

The “outlaw” marshals too, were concerned about how easily they’d infiltrated Lacy’s gang. They wondered if this wasn’t an elaborate set-up on Lacy’s part to eliminate the greater threat to the Daltons’ operations. More worrisome still, was how Christine Dalton would react to their presence.

Christine Dalton was far more given to murder in cold blood with little—or no cause, than was her granddaughter.

Chris moved closer to Sarah and spoke very quietly, “I’m a little worried—this was too easy.”

“It seems to have been, but still—Lacy is no one’s fool. We know this from our past encounters with her.”

“We too, are pretty formidable, Chris.”

8 Responses to Lacy is no one’s fool