“Yes,” Linda replied, “Seems like an even fight to me.”

Both Linda and Ralph un-looped their guns—Linda grinning and Ralph frowning.

The highwaymen made their first mistake, “Alright! This is a hold-up, drop your guns and raise your hands!”

That tactic had always worked. They were a bit surprised when Linda and Ralph calmly looked at them, “Are you kidding?”

Linda and Ralph did not—just an eye-blink later—nine highwaymen-wannabes lay dead or wounded.

The survivors would soon look for another occupation.

The dead would not.

Season 12—Adventure 6—Saskatchewan! Episode 18… The Conestoga wagon (and its occupants) survived the attack—and lavished praise on our heroes. They, of course, got all modest and stuff.

Moments later, Big Mac and Merle McIntyre arrived at the gallop, “Nothing like playing ‘cavalry,’ fellas—a day late and a dollar short.”

“You could have saved a few for us, Ralph,” Mac laughed, “You are so competitive.”

“You two best stay with us, considering,” Linda suggested, “If this attack is any indication of what’s ahead.”

Meanwhile—A day later, Lacy & Co. arrived in Rourke’s Drift… “This is our Pub, let’s go inside and I’ll introduce you to my grandmother, Christine Clark.” 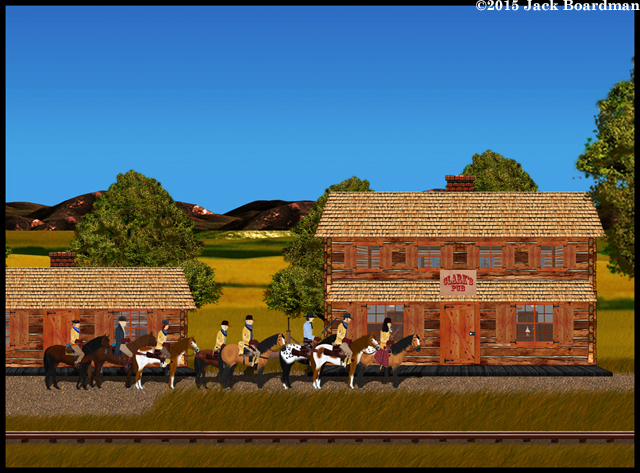 They didn’t find her inside, at least not at first, “I’ll see if I can find her—feel free to play a little Blackjack—who knows, you might strike it rich.”

SUDDENLY—without warning… The time travelers arrived back in 2015… on the patio of the Tardis Tavern!

At first completely disoriented, then wondering…

“Why are we back,” Chris asked, “We’ve resolved nothing?”

“And where are our dog-people—and Flutters?”

“I don’t have a clue, Sarah,” Boomer replied, “CUJO! Get your furry butt in here!” 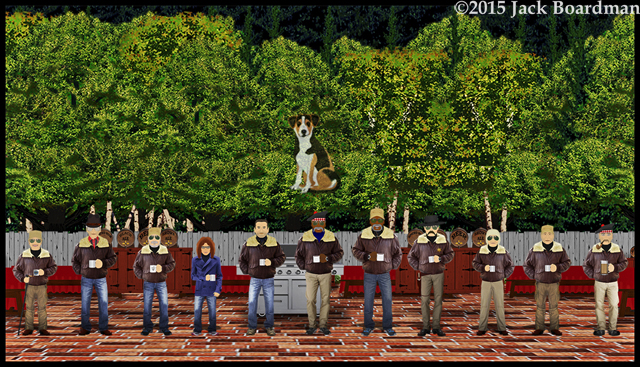 “Why have you yanked us back and where are our dogs and bird-brain?”

“The weekend is over and all of you have things to attend to here in 2015—Flutters, Daisy, Buttons, and Pepper do not,” Cujo bayed, “They’re remaining as placeholders, so time does not advance in 1873 Saskatchewan.”

“Yes, Alpha-Jack,” Cujo replied, “Because they are frozen in time, everyone in 1873—world-wide—are as well. You time-travelers are free to attend to your normal routine until next weekend—so get to it!”

Will it be that easy?

Thus ends this Adventure— But our story? To be CONTINUED…

6 Responses to “Will this work?”