PREVIOUSLY: Out of sight, Cujo observed her human friends and noticed they all seemed happy to be returning to the past. She was, as always, concerned for their safety—sure, she could bend time to a point BEFORE one of her friends were hurt or—killed—but they would experience the pain, astonishment and fear all feel, if even for a split-second, when that sort of thing happens.

She made herself visible to her friends, “Hello all. You will soon find yourselves exactly where you were when you left Saskatchewan, so make yourselves ready. There is little else I can tell you, now—other than you’ll be leaving in five minutes.”

The time-travelers finished their drinks and food—and wished each-other luck.

Five minutes later—they were gone from the 21st Century.

Season 12—Adventure 7—Saskatchewan Part Deux! Episode 3… Big Mac, Merle, Linda & Ralph were (back) escorting the Conestoga wagon at the walk (no sense in moving fast—the non-sentient horses would soon tire and be unable to gallop should the need arise), and no highwaymen appeared—at least initially.

Flutters was flying high-cover—his keen eyesight allowed him to scan ahead, to each side, and behind for many miles. He saw no danger—at present.

Or at least, what he perceived as a threat.

“Where are you folks heading?” Linda was curious—these people just didn’t strike her as gamblers. 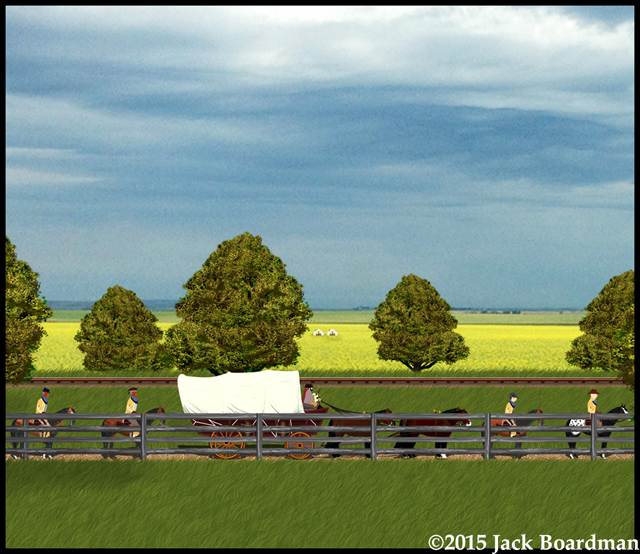 “We were out in the Yukon—searching for gold,” the driver replied, “Found a little, but not enough for anything but to get us back home.”

“We have a farm in the Dakotas. It’s a hardscrabble living—but honest work. My brother and his family stayed back to work the farm—we were going to send for them had we struck it rich. Now, we’re returning with just enough gold to keep the farm.”

“I’d say you were successful.”

“I expect we were—we have a place to call home,” He replied, “Where are you folks from? You sound American.”

“What brings you to Saskatchewan?”

“We have friends in O’Roarke’s Drift—moved there from home a few years back.”

“We’re dangerous people,” Mac rumbled, “So I guess that works-out.”

6 Responses to Escorting the Conestoga wagon