PREVIOUSLY: “I reckon so,” Lacy replied, “I don’t much like killing, but sometimes it’s necessary.”

Chris by that time was deep in thought. She was remembering how she had felt when she and Wyatt crossed Nevada. She felt Lacy there and had expressed to Wyatt her thoughts on reincarnation. Was it possible she was Lacy and Lacy was her?

When she and Wyatt were in Sedona she had bought several books on reincarnation and simultaneous lives. One passage from an author stuck out to her, “Many spiritual teachers and spirit guides, including my own guides, talk about reincarnation—one lifetime after another, often spanning many centuries. They also talk about simultaneous time—where past, present, and future all exists in the present moment.”

What if Lacy and she were two parts of a whole that exists in even more timelines?

Chris shook her head; those kinds of thoughts could lead to a mistake.

She did not want to put her friends in any danger.

But how could she let anything happen to Lacy if she were part of her?

Season 12—Adventure 7—Saskatchewan Part Deux! Episode 7… Chris was lost in thought, and in her mind, called out, “Cujo—where are you?” 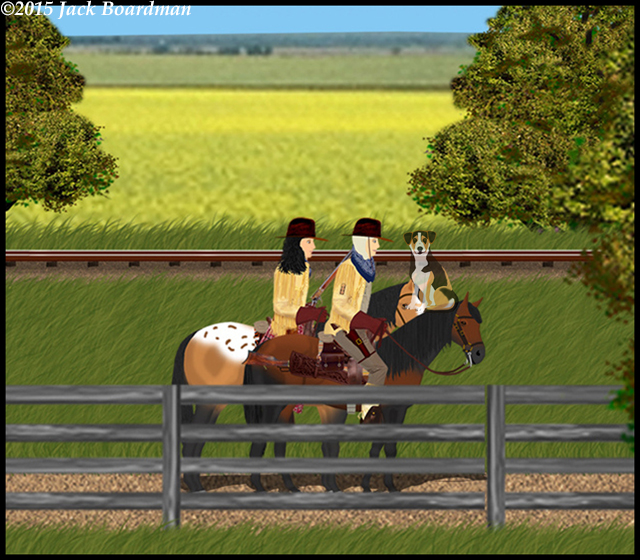 Cujo appeared—and only Chris could see her, “I am here, how may I help you?”

“Cujo!” Chris exclaimed, “I need your counsel, What if Lacy and I are two parts of a whole that exists in even more timelines?”

“I had not considered that—but if true, it would explain why you and the others can never seem to capture—well possibly capture—but never kill her. The universe has certain laws which may not be broken. You exist—you MUST continue to exist until the universe decides it is time for you to leave. Killing Lacy would disrupt the time-space continuum. It CANNOT happen.”

MEANWHILE—Flutters met with Silverthorn & MacIntyre… “After the failed attack on Fort Justice,” James Silverthorn explained, “I met with Colonel Cooper and asked if he could spare a couple of horse-guns—and he told me he could, as he had another entire battery still hidden in Adelbert Simpson’s mine.”

“And we’ve got a two-gun battery, complete with crew on the train—practicing their skills just over the hill out there,” Inspector MacIntyre nodded his head towards the open door, “And, of course, a troop of Mounties, along with Silverthorn’s cavalry.”

“Impressive—but you must hurry and get in place—before it’s too late!”

7 Responses to “Cujo—where are you?”