PREVIOUSLY: MEANWHILE—Flutters met with Silverthorn & MacIntyre…“After the failed attack on Fort Justice,” James Silverthorn explained, “I met with Colonel Cooper and asked if he could spare a couple of horse-guns—and he told me he could, as he had another entire battery still hidden in Adelbert Simpson’s mine.”

“And we’ve got a two-gun battery, complete with crew on the train—practicing their skills just over the hill out there,” Inspector MacIntyre nodded his head towards the open door, “And, of course, a troop of Mounties, along with Silverthorn’s cavalry.”

“Impressive—but you must hurry and get in place—before it’s too late!”

Season 12—Adventure 7—Saskatchewan Part Deux! Episode 8… They did hurry—with the help of the Adventure Train—and were in position before the highwaymen arrived.

Big Mac seeing the Adventure Train flash by—and ordered the Conestoga wagon to stay in place—while he, Merle, Linda and Ralph rode down the hill and advanced towards highwaymen’s position.

At the same time, Inspector MacIntyre and his men, and James Silverthorn and his braves took-up positions along the hill.

Just then, the horse guns volleyed—decimating the highwaymen. The combined “cavalry” then charged the surviving highwaymen—they didn’t survive the onslaught—all but one. 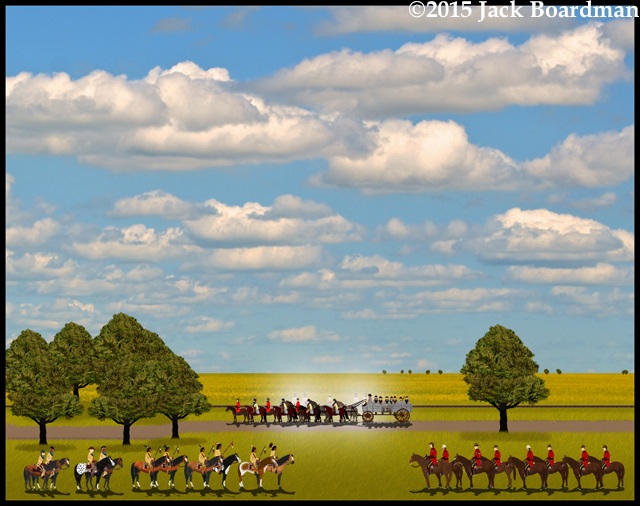 As Big Mac & Ralph (both combat veterans—Big Mac (Vietnam) and Ralph (Korea)—were the only two who could handle body-checks. And that wasn’t easy for either man.

It was Ralph who found the lone survivor—a man he recognized from when he replaced the ticket agent in the Fort Justice RR station—Miles Slater!

He wasn’t badly-injured—but was unconscious—and bleeding from a wound on his cheek. With Big Mac’s help Ralph carried Slater under a nearby tree—where they cleaned and bandaged his wound.

He remained unconscious for about 15 minutes—and when he came to he looked at Ralph, and blurted, “YOU!”

And immediately knew he’d made a big mistake.

Both McIntyre brothers moved to each side of Slater—with Mac rumbling—ominously, “You’re working for Lacy Dalton.”

It was not a question—fear spread across his face as he rightly determined that Mac would take great pleasure in mangling him beyond all recognition—smiling widely as he did so, “Y-y-yes. I-I-I was…” 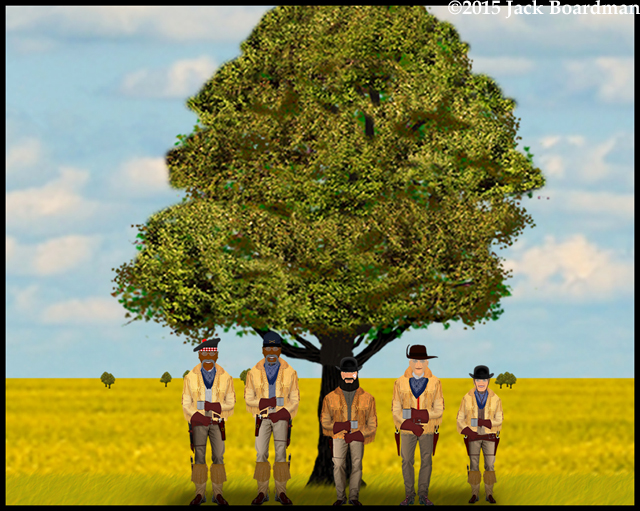 “Why were you and your dead friends killing innocent people—people whose only ‘crime’ was travelling?”

“To make Lacy and Christine Dalton look bad—so’s me and my boys could take-over O’Rourke’s Drift.”

12 Responses to “Because they’ve gone straight.”