PREVIOUSLY: They rode slowly along the road—remaining alert for highwaymen as the threat continued to exist.

The boredom came to an end when Daisy—trotting just beyond the RR tracks—bayed, “Incoming Flutters!”

Daisy had intentionally positioned herself on the far side of the elevated tracks to cover that flank where Ralph and company could not see.

“Okay—you know what to do!” Mac exclaimed, “Play it cool!”

Ralph glanced at Slater, “YOU KEEP YOUR MOUTH SHUT—OR YOU’LL BE THE FIRST TO DIE!”

Slater got the message.

Season 12—Adventure 7—Saskatchewan Part Deux! Episode 10… As they closed with the riders with Daisy continuing to guard their left flank our heroes were a little surprised by the greeting, “Halloo! How’s the hunting?”

“No ma’am,” he whispered, hoping his cooperation will be remembered at his trial.

As they got closer, the leader of the twelve noticed the mule-train behind Merle, “You got enough to share?” 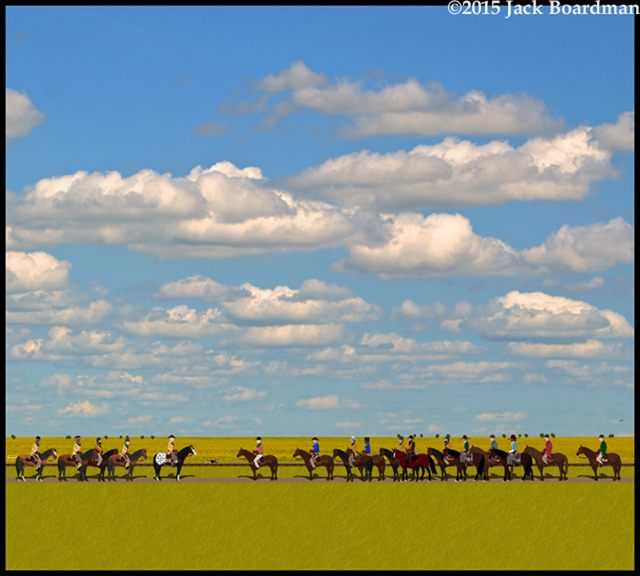 Merle rumbled, “You did nothing—yet you expect us to share?”

Unnoticed, Linda slipped Slater’s gun back into his holster.

“That would only be right—considering you…” he was stopped in mid-sentence by all five drawing their weapons—ALL of their combined eleven side arms.

“I reckon the answer is no,” the leader replied as he realized these desperadoes were more than a match for them.

“If you wish to live another day—yes,” Mac laughed. It was not a pleasant laugh.

“However,” Ralph smiled, “If you wish to join us on our next adventure—THEN you can share in the profits.”

“Wal,” the group’s leader replied, “We hafta talk to the boss about that. By the way, I’m Rufus Smith, straw-boss of this outfit.”

“Her name is Christine Clark,” Rufus replied, “Toughest woman I ever met.”

“She is,” Miles Slater whispered to Linda, “She’s ruthless—I seen her kill a fella for just asking a question she didn’t like.”

“Absolutely,” he replied, “Lacy has a good reason when she acts, and usually feels bad if she has to kill—Christine acts without remorse. Lacy’s biggest problem is men. She just broke-up with my brother, Edward, and Arturo Morales. I reckon she couldn’t decide between the two.”

Ralph Halvorson made the decision—for good or ill, “Let’s ride and offer our services to Christine Clark.”