PREVIOUSLY: A short time later AJ returned, bringing the requested refreshments, and shortly thereafter parked the battleship-Buick outside, “You’ll need a place to stay, as well. There’s a cabin available up on Bluff Road, I called Cam Farkleberry about it, and she told me to give you the door combo.”

“You do real estate, too?” Linda asked.

“Yep. Both Medlar Almonzo and I are licensed rental-agents,” AJ replied, “That saves Cam a lot of time.”

“Wonderful,” Boomer replied, “One last request—where can we find the Lakeview City Marshal?”

MEANWHILE—In the Duluth-Superior Harbor… Autoworld Transit 2 was preparing to depart with a load of cars destined for Chicago, “Helm, set a course for the Wisconsin passage onto the lake.”

“Aye Captain, Wisconsin passage it is.”

Lakeview City Story—In Search Of—Episode 3… “You will find him at his ‘office’ next door—in the bar.”

“Let’s not visit him just yet, Linda, we’ll have plenty of time after we change into civilian clothing—let’s head for the cabin.” 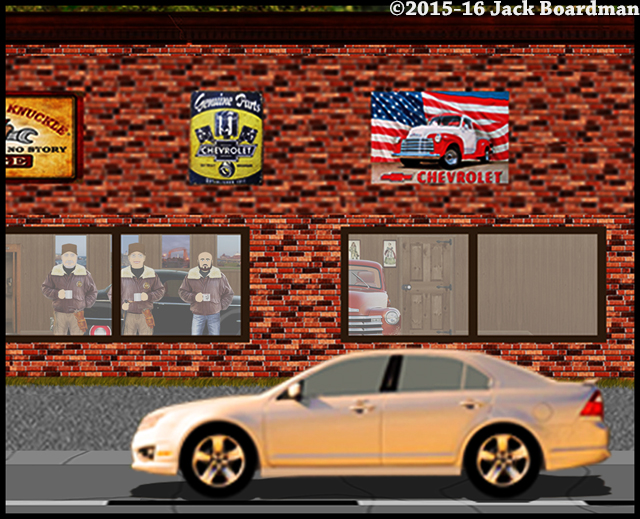 “AJ, we’re certain we’re going to need the truck, eventually, all the ‘Marshal’s’ markings can be removed without too much trouble. No rush on this—by the end of the day would be soon enough.”

“As soon as Almonzo gets here, I’ll take care of it.”

­A half hour later, Boomer and Linda were on their way to the cabin—as they drove by they noticed two women standing outside the suspected hideout of the former Minicucci-McOsker gang, “I hope they didn’t see us.”

“Probably not, Linda,” Boomer replied, “But so what if they did?”

“So what?” Linda rejoined, “They’re not fools, cuzzin, they’ll be curious—at the least.”

“Good point,” Boomer replied, “I guess we’re a (ugh) married couple—time for you to make us some fake driver’s licenses—Mr. & Mrs. Carbunkle—newlyweds.”

Gina and Bambi were waiting for the boys to return from their assignment—and were discussing the chances of them screwing it up when Bambi noticed the big Buick drive by, “That’s odd—the road dead ends just past that cabin and we never see anyone on the road.” 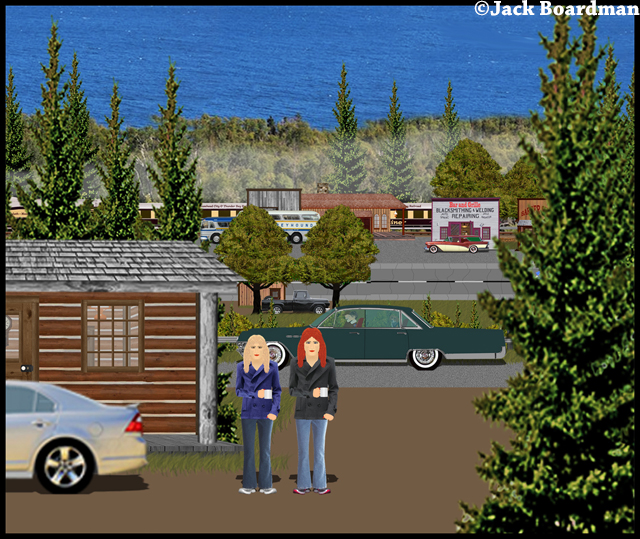 “It is Bambi—maybe we should walk that way and check them out.”

“It would be the neighborly thing to do.”

They arrived just as Boomer and Linda finished unloading their equipment and were returning to the car, “How-do folks, we’re your next door neighbors—I’m Gina and this is my sister Barb.”

“Yah,” Linda replied, “Good to meetcha, dontcha know. We’re da Carbunkles—from da Raynch where dere ain’t no chobs in da mines and we heard dere was chobs here. So we come here and da mister, Jack, got a chob sellin’ cars and I’m Linda and dey hired me to keep da books.” 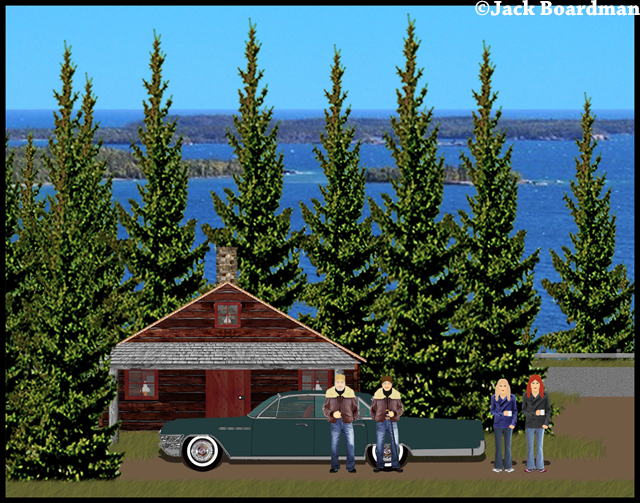 Gina bought their story—nobody could be that, well, accurate—pretending to be rustic.