PREVIOUSLY: With Boomer heading north, Linda decided to head south out of town—she was certain that the gang’s male members simply could not resist finding a place they could hang-out without their respective wives.

She drove about five miles outside of town where Historic 61 meanders down close to the lake and too late, noticed a bar on the lakeside.

She turned around, taking two or three passes to do so—that big Buick doesn’t exactly turn on a dime, y’know. She parked in front of O’Donnell’s Bar.

Too late she recognized two men inside.

Lakeview City Story—In Search Of—Episode 8… Considering that it was unlikely they would recognize her as anyone other than their new neighbor—she decided to go inside.

She was the only woman in the bar, “Scotch, neat, doncha know.” 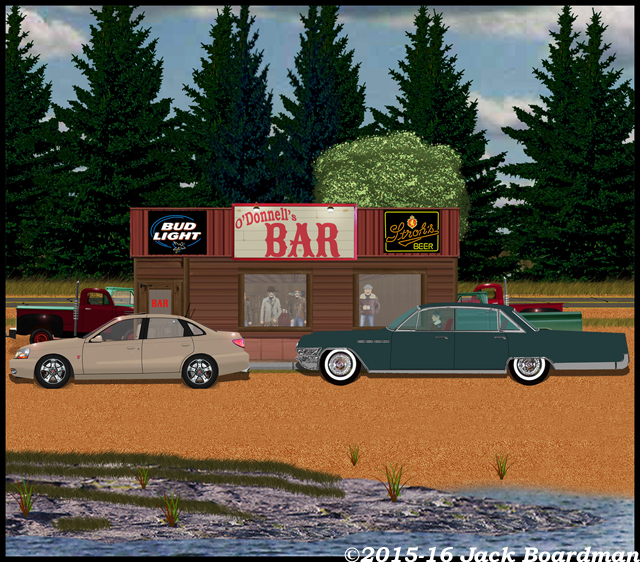 The bartender raised an eyebrow, shrugged, and poured the drink—his jaw dropped when she knocked it down in one tip of the glass, “I’m Scots—it’s in m’blood—doncha know!”

Without looking-back, Linda climbed in the big Buick and drove off.

Linda was relieved her neighbors present in the bar chose not to engage in conversation—that may have had to do with the bar seemingly being a “men only” establishment. A refuge of sorts for Minicucci and McOsker.

Linda simply couldn’t imagine them hanging around their respective wives—when they could be commiserating in a male-only refuge.

MEANWHILE… Boomer passed the access road to the small harbor and stopped a short distance away on a side road where he could view the harbor. He parked his truck behind some lakeside evergreens and walked to where he could see the boats—there was only one boat there.

“Lady Luck,” formerly “Chicago,” was docked and he could see people moving about in the upper cabin.

Clearly the Apoloni-DeSantino gang had added people during their stay in Duluth-Superior, and perhaps, they were being kept on the boat until needed.

Two of them walked out on the dock carrying “Tommy guns.” 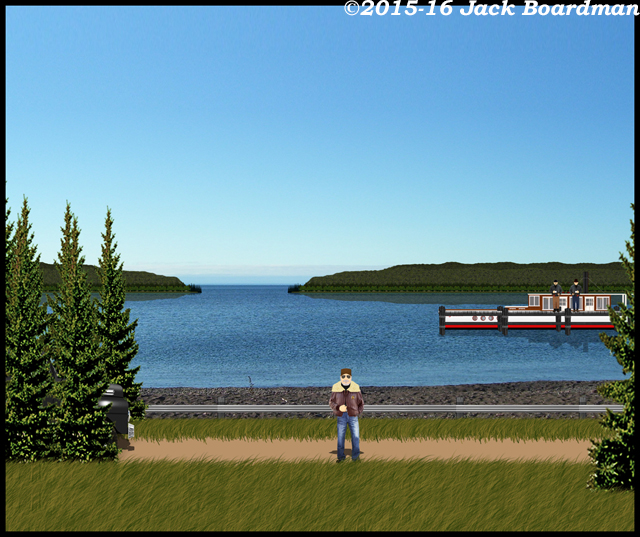 Two of them walked out on the dock carrying “Tommy guns.”

Boomer had to make a quick decision—go for his own pre-war Thompson Submachinegun—a relic from their last encounter with this gang. Or he could simply walk slowly back to his truck—as if he didn’t see them and drive away. He chose the latter.

Really, it was a pretty stupid move on their part—exposing the guns. He decided to head back to the cabin.

He might just have to mention what he saw to Gena or Bambi the next time he saw them. He surmised they would be less than happy learning this—after all, they’re not here to make waves, but to fit-in.