PREVIOUSLY: Clearly the Apoloni-DeSantino gang had added people during their stay in Duluth-Superior, and perhaps, they were being kept on the boat until needed.

Two of the occupants walked out onto the dock—both carrying “Tommy guns.”

Boomer had to make a quick decision—go for his own pre-war Thompson Submachinegun—a relic from their last encounter with this gang. Or he could simply walk slowly back to his truck—as if he didn’t see them and drive away. He chose the latter.

Really, it was a pretty stupid move on their part—exposing the guns. He decided to head back to the cabin.

He might just have to mention what he saw to Gena or Bambi the next time he saw them. He surmised they would be less than happy learning this—after all, they’re not here to make waves, but to fit-in.

Lakeview City Story—In Search Of—Episode 9… On his way back to the cabin, Boomer stopped at Lakeview Auto Sales, “S’up?” 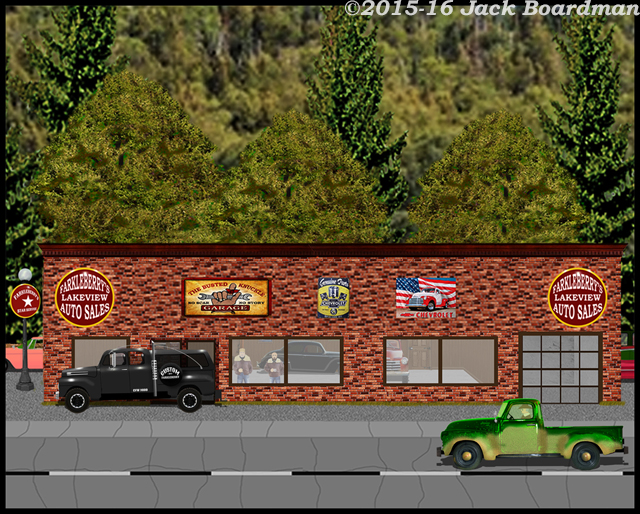 “Interesting enough,” AJ replied, “Your subjects exchanged those two Ford Fusions for a Saturn L200 and a Ford Focus—both identical to Mom’s cars—er, I mean your FAMILY IRL cars.”

“Ah—my IRL-self would appreciate that—and does,” Boomer grinned, “They are better illustrations than the Fusions. Anything else?”

“Linda stopped-by,” he replied, “She found Giordano and Aleev at a men-only bar down lake about five miles. She thinks that’s where they go to escape their wives.”

“Good—she and I have much to discuss, along with some planning.”

“Remember, tomorrow is Linda and your first day of work.”

“I’ll remind Linda, but I’m sure she’s looking forward to the keeping-of-the-books.”

Cujo created a vacancy at the only boardinghouse in town. She didn’t evict anyone, she just added on to the rear of the house—the owner of the house had no memory of the house not having that room—but rather, was concerned about having a vacancy. He was relieved and was delighted to rent it to our most-fortunate heroes. 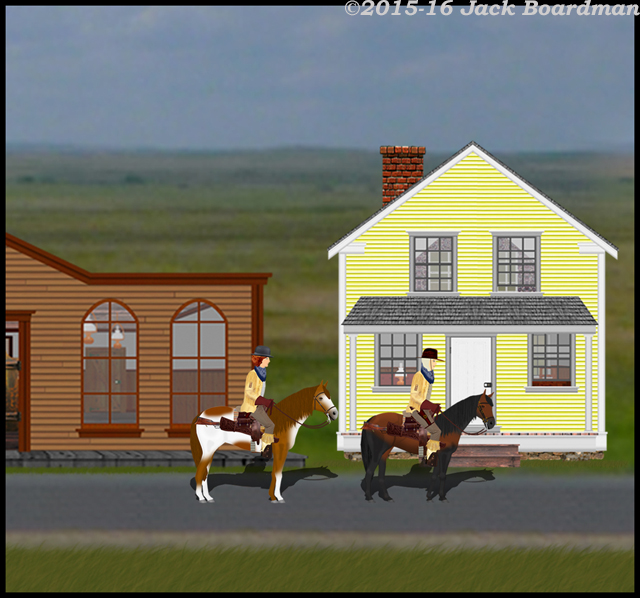 Cujo created a vacancy at the only boardinghouse in town

Our heroes smiled as they negotiated a very favorable rental rate.

To be CONTINUED—AFTER taking the week off for Christmas…