“Yah—you-betcha,” Linda replied, “Let me introduce you to Gina Apoloni and Bambi DeSantino, our next-door neighbors. Ladies, this is my husband, Jack.”

“Gina, Bambi, I am pleased to meet you,” Boomer began, but was interrupted by a knock on the door, “Excuse me, please—it appears this is a day for company.”

Boomer opened the door—and was met by a very-surprised Sean O’Reilly.

“Uh—hello, may I speak with Gina Apoloni, please,” O’Reilly asked.

“Oh, sure, c’mon in,” Boomer replied—showing no recognition, outwardly, as he motioned the man inside.

Lakeview City Story—In Search Of—Episode 13… “May I speak with you, ma’am, outside?”

“Oh sure, Sean,” Gina replied, and turned to her hosts, “Sean is the captain of our yacht, moored down in the harbor, he and the crew are about to set-sail for Chicago—where we get our monthly supply of alcoholic beverages—and frozen hand-made deep-dish pizzas.”

“I would kill for an authentic Chicago deep-dish pizza!” Boomer exclaimed, adding, “I was admiring a 30s-era yacht in the small boat harbor, just before I came back here—I assume that’s yours?”

“Yes it is, I inherited it from my father. I’ll see to it that you and Linda get some pizzas,” She replied as she went outside. “Okay, Sean, please explain why you came here.” 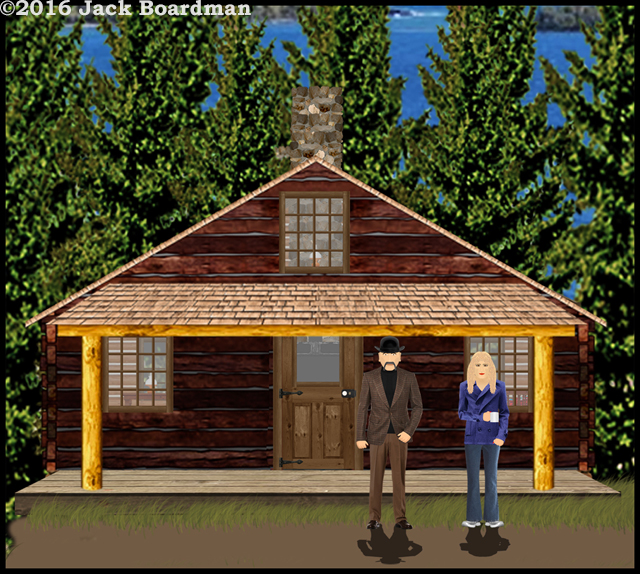 “I’m sorry, boss, but the boys wanted to kill that guy, but I stopped them.”

“When you get a 10 miles offshore, see how well Aldo can swim,” Gina replied, “And you and the survivors get some appropriate clothing for a captain and crew—okay? And thanks for showing-up here—I needed to know this. Bambi and I are interviewing these folks for the possibility of adding them to our operation.”

“Because he probably did see you guys on the dock—and showed incredible cool by ignoring you. That cannot be taught. And his wife showed similar ability by affecting a well-done phony accent until she felt she could trust us.”

“So you think they’re up to something—illegal?”

“I don’t know—yet. We’ll take our time with them, if we’re wrong, there’ll be no harm done.”

“Yes, ma’am, there may be possibilities.”

“You’ll need to replace Aldo, I suggest, Captain, you recruit someone while you’re docked in Chicago,” Gina had never called Sean “Captain” before, but she felt he’d earned that position.

Gina returned to the cabin, smiling—and wondering how to recruit the couple inside.

To my GENTLE READER—I’ve been considering the amount of time I put into producing this blog—and with my age, I come to think of what legacy I’ll be leaving behind. Couple that with the apparent loss of one of our writers—I have decided to END THIS BLOG upon the completion of the posts already written, which will be deployed through late February.

I have been working-on my family’s genealogy since 2000, and THAT is the legacy I hope to leave my family.

It would seem that a blog that is not a news, political or “mommy” blog is a viable format these days.

This was not an easy decision for me as I’ve come to love the Danger Bay characters—but they fictional and incapable of returning the compliment.

Thank you GENTLE READER for hanging-out here now and again!