PREVIOUSLY: “Do you see room for advancement there?”

“Does that include car and truck acquisition?”

“Yes, but we only order from one source, as Farkleberry’s Lakeview Motors is owned by Silverthorn Enterprises—all vehicles are ordered from them.”

“I see,” Gina replied, “So, there’s no chance of ordering from another supplier?”

“Probably not,” Boomer grinned, “But we’ll know more after we’ve been in place for a while.”

Lakeview City Story—In Search Of—Episode 15… “I can’t help but notice your rather expensive taste in furniture—that’s a ‘Parsons’ Loveseat—is it not?”

“You have a good eye, Bambi,” Linda replied, “It is, and the dining set is by Abercrombie & Wells.”

“Not that you appear poor, but those pieces must have a price tag in the tens of thousand dollars,” Gina suspected they were more than they appeared to be, “How did you manage such items?”

“All I will tell you,” Linda replied, “Is there is more to us than meets the eye—and we’d prefer to keep it that way.”

After first speaking privately with Thomasso DeLuca, and Placido Mirante, one at a time, he called the entire crew into his office for a meeting, it was a short—very-short meeting, before Captain Sean O’Reilly gave the order, “It’s time for you, Aldo, to take a little swim.” 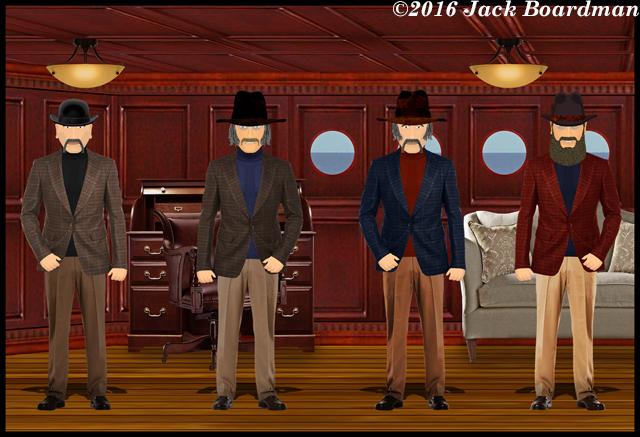 “In that case, you’d better learn—quickly,” O’Reilly turned to the others, “Escort the mutinous bastard to the gunnel and feed the Sturgeons.”

“Yes, Captain,” the newly appointed first mate Thomasso De Lucia replied as they dragged the screaming Aldo out on deck.

Moments later, all that remained on the surface of the 40º Lake Superior water, was his hat.

“Set a course for Chicago, Thom,” O’Reilly replied, “Placido? Please contact Autoworld Transit 2 and arrange a rendezvous with her.”

“We should bring my boat here,” Linda finished Boomer’s thought.

“Exactly,” Boomer replied, but she should be…”

“Renamed,” Linda did it again, “She’s been renamed—‘Crusader Rabbit,’ like the old kid’s TV show.”