PREVIOUSLY: Shortly after Boomer had beer in hand—Braddock “One-Eye” Farkleberry entered the bar and stared first at McOsker then at Minicucci—hard, “What a couple of sissies—whaddareya doin’ in a man’s bar?”

One-Eye could see the fear in both their eyes—they were indeed cowards. He slowly walked towards them, “Barkeep—draw me your best beer to enjoy as I take these two sissies apart!”

A couple of men started to move towards the impending fight, apparently to aid McOsker and Minicucci—Boomer intercepted them, “You fellas ought to stay back—and enjoy the two against one entertainment.”

“We was gonna help the seaman.”

“I don’t think he needs the help,” Boomer grinned, “Bets anyone?”

Lakeview City Story—In Search Of—Episode 18… Not surprisingly—there were no bets, and both McOsker and Minicucci were a mangled mess on the floor. Two of the patrons dragged them outside—one of whom said to them, “Don’t bother coming back—you’re not welcome here.”

Boomer and One-Eye remained at O’Donnell’s for another hour—but remained apart, each at a separate table. Both learned a lot about McOsker and Minicucci. It seems they spent much of their time bragging about how important they were—how they were going to take over the town. 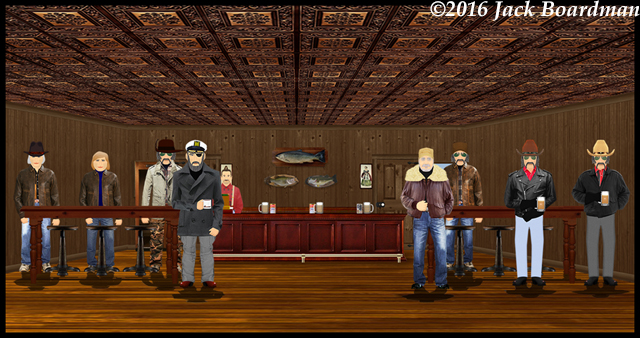 Boomer and One-Eye remained at O’Donnell’s

They left separately, with Boomer walking towards the back parking area, where he waited for Farkleberry. Ten minutes later they were on their way back into Lakeview City where Boomer remained to start his shift—officially—as the sales manager at Lakeview Motors. Farkleberry returned to his boat in the harbor to pick-up his sea-bag and head for Boomer & Linda’s cabin.

“We’re neighbors of Jack Boardman, and we understand he’s your new sales manager,” Gina greeted AJ, “Is he here?”

“He’s scheduled to start at ten,” AJ replied, “May I offer you some coffee while you wait?”

“That would be great, thank you,” Gina smiled noting the time—a five minute wait.

MEANWHILE—out on Lake Superior… the Lady Luck made her rendezvous… with Autoworld Transit 2, “Ahoy Transit two, this is Lady Luck—we’d like to come alongside.” 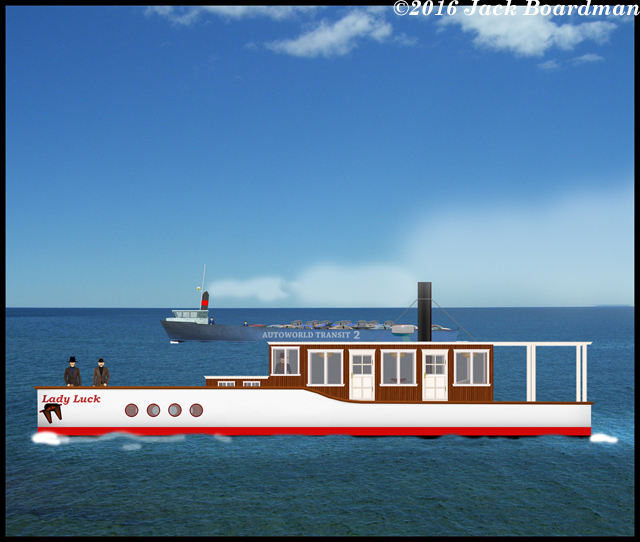 Lady Luck made her rendezvous

“Greetings from Gina, Captain Howell, I’m Captain O’Reilly of the Lady Luck and I bring orders from Gina.”

“And they would be?”

“Use your encrypted radio and contact McCloskey at the warehouse—tell him Gina wishes small shipments of their best cars and trucks to be sent to Lakeview City by truck—ten vehicles total.”

“Certainly, O’Reilly—but is it safe?”

“It will be—she has probable inside operatives there and is confident of bringing them on-board. We can always call them off if it doesn’t work.”

6 Responses to Inside operatives