Back in Lakeview City

PREVIOUSLY: MEANWHILE—out on Lake Superior… the Lady Luck made her rendezvous… with Autoworld Transit 2, “Ahoy Transit two, this is Lady Luck—we’d like to come alongside.”

“Greetings from Gina, Captain Howell, I’m Captain O’Reilly of the Lady Luck and I bring orders from Gina.”

“And they would be?”

“Use your encrypted radio and contact McCloskey at the warehouse—tell him Gina wishes small shipments of their best cars and trucks to be sent to Lakeview City by truck—ten vehicles total.”

“Certainly, O’Reilly—but is it safe?”

“It will be—she has probable inside operatives there and is confident of bringing them on-board. We can always call them off if it doesn’t work.”

Lakeview City Story—In Search Of—Episode 19… Captain Howell immediately sent the message to McCloskey, who in turn began to make the necessary arrangements to ship vehicles to Lakeview City—it would be two weeks before the first truck would leave Superior.

MEANWHILE—Back in Lakeview City… Boomer and Braddock “One-Eye” Farkleberry, drove back to town, where One-Eye dropped Boomer off at Lakeview Auto Sales, “Ready to start?”

“There’s somebody here to see you,” AJ was looking to his left.

“A little of both,” Gina laughed, “We are considering converting our leased cars to purchased cars.”

“It is,” Boomer replied as he walked over, “And you won’t like it.”

“What is it?” Gina sensed it would not be good news.

Boomer noted that AJ had gone into the sales and accounting office before he replied, “Your spouses have been running-off at the mouth at O’Donnell’s Bar.” 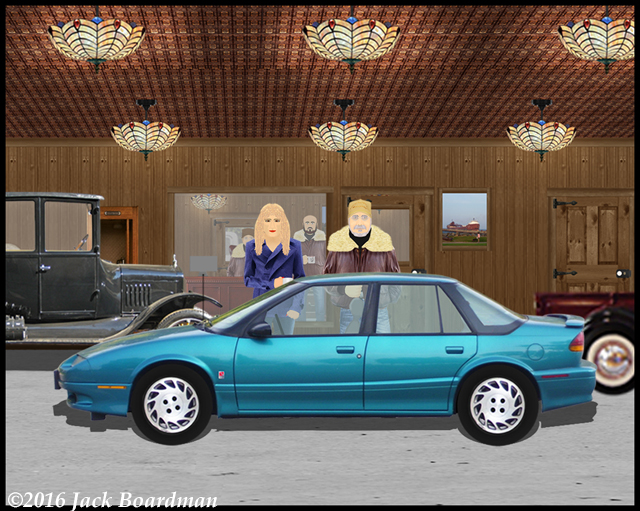 “Your spouses have been running-off at the mouth…”

“They got into a fight with some seaman this morning, I was there for my morning ale—and lost, badly,” Boomer replied, “And before that, last night when I was there, bragging about your operations here in town.”

“You drink in the morning?” Gina asked—her mind racing about the news of Aleeve and Giordano’s collective big mouths.

“Not exactly—craft-ale flavored dark roast coffee with no alcohol content,” Boomer laughed, “It gets my corpuscles corpuscling, I bought a bag of this coffee blend for home.”

“Mostly the short one,” Boomer replied, “The taller fellow was trying to shut him up—both were pretty drunk.”

“Sure, anything,” Boomer smiled, “Well, almost anything. Good luck, Gena.”

6 Responses to Back in Lakeview City