PREVIOUSLY: “They got into a fight with some seaman this morning, I was there for my morning ale—and lost, badly,” Boomer replied, “And before that, last night when I was there, bragging about your operations here in town.”

“You drink in the morning?” Gina asked—her mind racing about the news of Aleeve and Giordano’s collective big mouths.

“Not exactly—craft-ale flavored dark roast coffee with no alcohol content,” Boomer laughed, “It gets my corpuscles corpuscling, I bought a bag of this coffee blend for home.”

“Mostly the short one,” Boomer replied, “The taller fellow was trying to shut him up—both were pretty drunk.”

“Sure, anything,” Boomer smiled, “Well, almost anything. Good luck, Gena.”

“He went next door,” Aleev McOsker replied, “He thinks our neighbors were at the bar last night and this morning, so he went there for revenge.”

“What should we do?”

“Nothing. We’ll wait and see how our neighbors handle a surprise,” Gena smiled, “To see if they’re worthy of joining us.”

“What if they kill Giordano?”

“What if they do?” she smiled, “That would solve one of our problems.”

MEANWHILE—at Boomer and Linda’s cabin… as Braddock Farkleberry finished installing his radio equipment when he heard footsteps upstairs—he knew they could not be either Boomer or Linda, as both were at work at Farkleberry’s Lakeview Auto Sales. 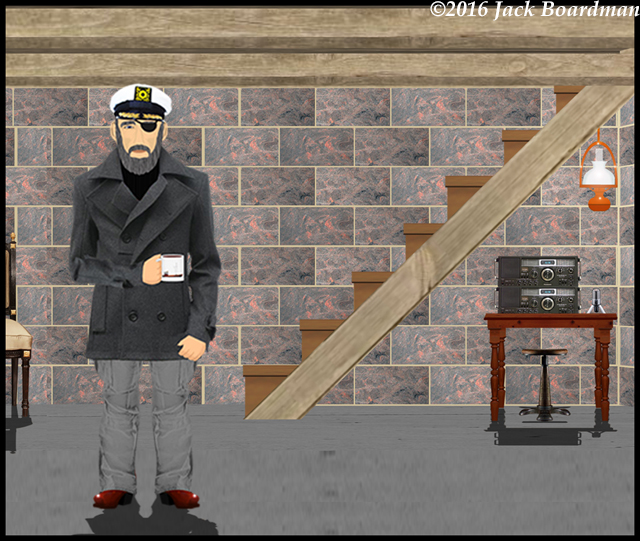 He also knew that access to the basement of the cabin was cleverly hidden by a trap door on the back porch of the cabin—he pondered whether or not to see who was there. It was then he heard footsteps go towards the door—and the door open and close.

He made the logical assumption that whoever it was had left.

Several hours later, Boomer and Linda had finished their day at Farkleberry’s… and arrived at the cabin, having left Linda’s car behind for routine service.

They noticed Captain Farkleberry’s car in the driveway, “I wonder how he’s coming with his equipment install?”

“I imagine he’s already got it installed,” Linda replied, “He probably doesn’t procrastinate—like a certain cuzzin I know.”

“When I get around to it—I’ll smack you upside the haid for that crack,” Boomer laughed.

Neither one of the bickering cousins saw the man looking-out the window. 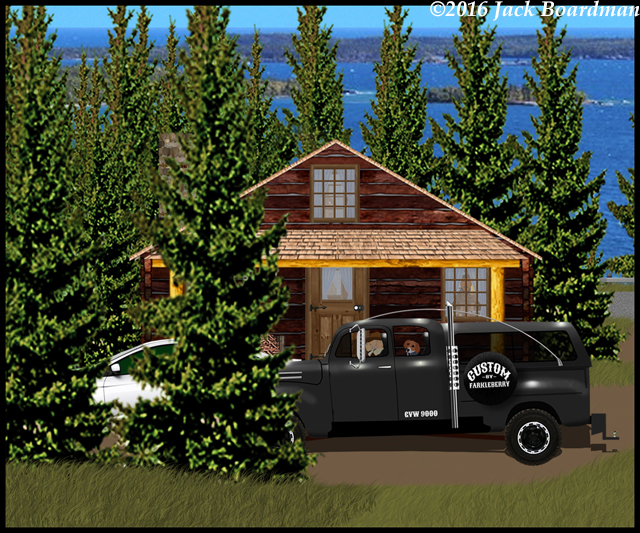 Neither one of the bickering cousins saw the man

“Whose turn is it to cook dinner?” Linda asked, fearing the answer.

Boomer reached for the door… 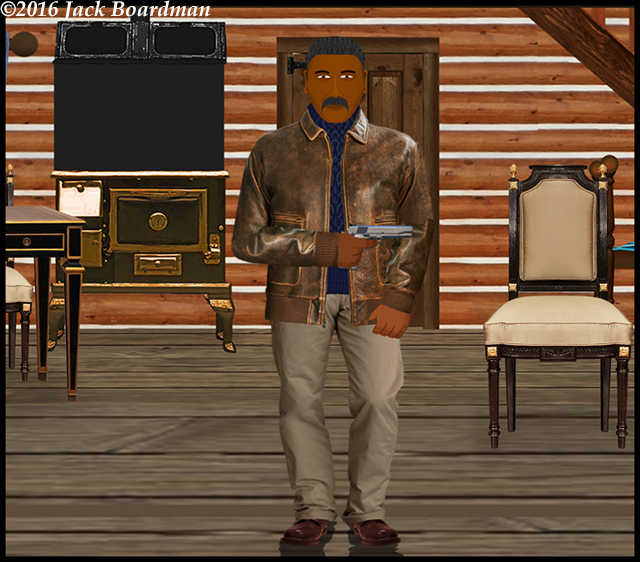 Thus ends not only this Adventure—but Season 12.