That works for me

PREVIOUSLY: “Whose turn is it to cook dinner?” Linda asked, fearing the answer.

Boomer reached for the door…

Thus ends not only this Adventure—but Season 12.

Season 13—Adventure 1—Return of Chris and Sarah—Episode 1… “NOOOO!—Don’t go inside!” 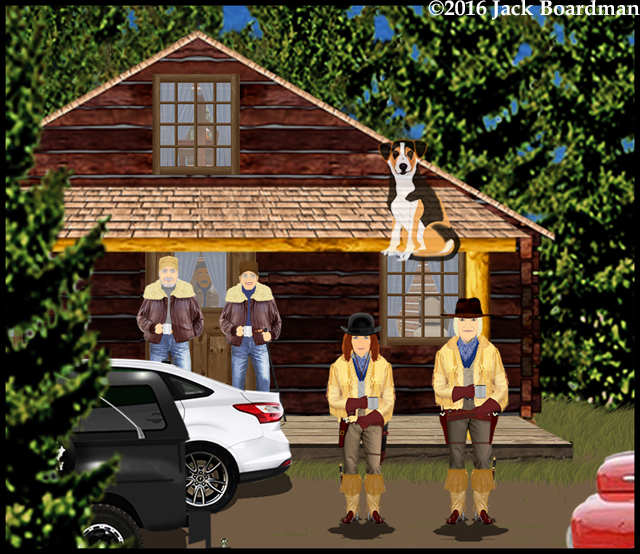 Boomer and Linda both turned towards a familiar voice, “Sarah! Chris!” Linda exclaimed, “Why not? And why are you…”

Linda didn’t finish her question as both Sarah and Chris, dressed for the 1800s, ran past them and into the cabin with guns drawn.

They heard the reports of a modern Colt .45 automatic pistol and two cap & ball .44s and then the thud of a body hitting the wood floor.

Both ran inside with their weapons out—fearful of what they might find.

They found Chris and Sarah holstering their respective .44s and a quite dead Giordano Minicucci lying on the floor.

“ONE-EYE!” Boomer exclaimed as he rushed out the back door to the hatch leading to the basement quarters of Captain Braddock Farkleberry. He was followed by his friends, Daisy and Cujo.

Farkleberry looked surprised at their arrival, “Hello my friends, what brings you to my lair?” 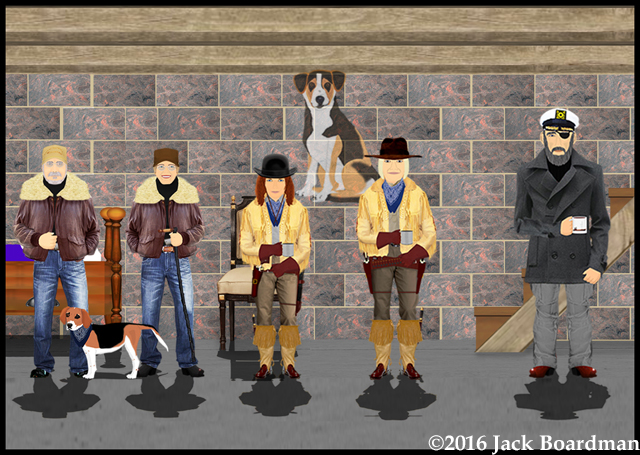 Farkleberry looked surprised at their arrival

“You didn’t hear the gunfire?”

“Um, no,” He replied, “But I was tuning my transceiver, and I was wearing noise cancelling headphones—so that’s no great surprise.”

“I think now, would be a good time,” Boomer was thinking out loud, “For me to visit our next-door neighbors—they must be concerned about Minicucci’s absence by now.”

“Calling the marshal’s office now,” Linda said, “Boomer and I should fire off a couple of rounds from our .45s.”

“No need,” Cujo wagged her tail, “Although you will remember what actually happened, I just took you back in time long enough for you and Alpha-Jack to shoot Minicucci.”

Boomer waited until Town Marshal Simpson (another cameo role for Big A) had finished his initial investigation, and Minicucci’s body removed to the county medical examiner’s office, before leaving to visit the neighbors, “I’ll go with you Deputy US Marshal Boomer,” Simpson grinned as they walked out to Simpson’s squad, “To break the news to Minicucci’s wife.” 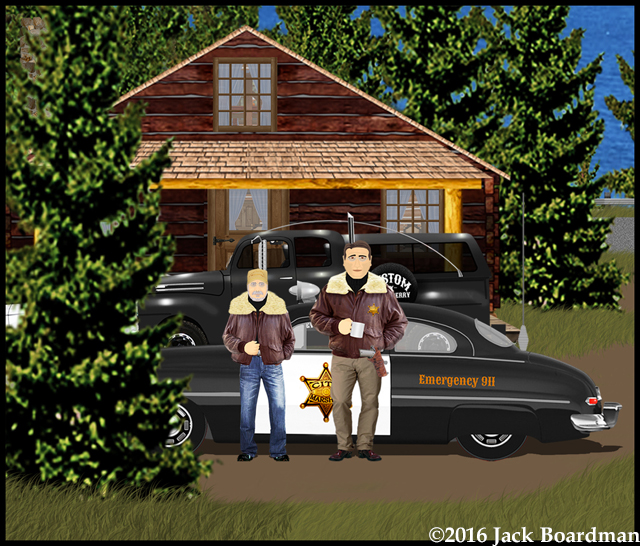 “What—and have RW-you change me back to my old self?” Simpson was a realist, “They already believe I’m corrupt, so having you with me will suggest you are corruptible.”

10 Responses to That works for me