A voice was heard as the door opened…

PREVIOUSLY: MEANWHILE—Boomer & AJ headed out-of-town… ostensibly to check on some vehicles to purchase for the dealership, as Boomer just knew that Apoloni-DeSantino Enterprises had spies keeping track of his activities, “Do you think they’ll figure out this is a different truck?”

“Nope,” Andrew replied, “The plates are the same, and every other important detail is visually the same—save for the lowered stance and the 5.0 insignia. Unless they try to stick a magnet on the aluminum body panels—of course.”

“What have you done with the other truck?”

“Loaded it up on an enclosed transport truck at three this morning. It’s on its way Med Farkleberry’s garage to be placed in deep storage—until you want it again.”

Season 13—Adventure 1—Return of Chris & Sarah—Episode 3… “I wonder how far they’ll go before they realize we’re no longer heading south on the highway?”

“Long enough,” Boomer replied, “We’ll head over to Forest City to meet with Sarah and Chris. I just got a message from Chris—they’re at Liam McOsker’s place.”

“Gravel roads all the way there.” 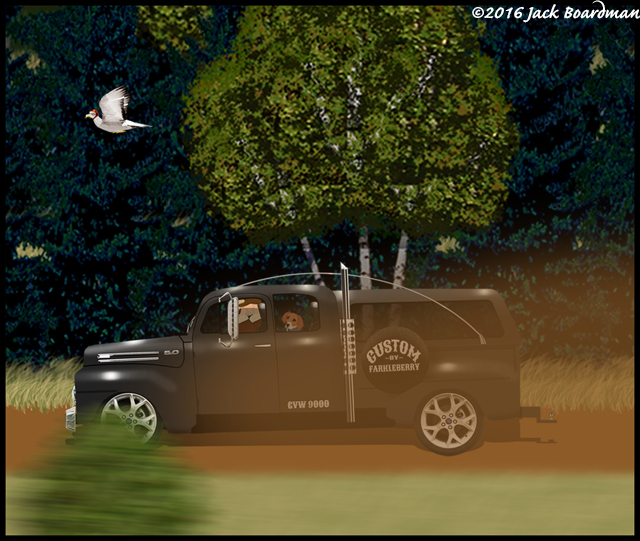 “Gravel roads all the way there.”

“You gonna let me drive for a while?”

After a series of tight turns, Boomer stopped the truck, “Something wrong?”

“C’mon in,” Liam greeted them, “They’re waiting for you, upstairs, first door on the left.”

“Are you sure you weren’t followed?” Chris greeted—knowing the answer already—the devil made her ask. 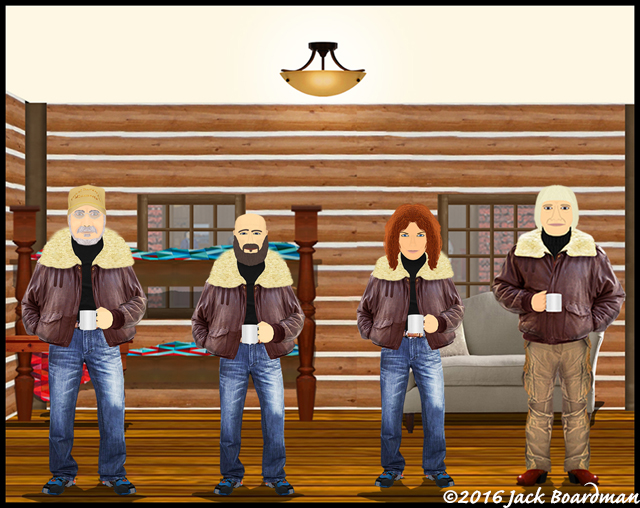 “Are you sure you weren’t followed?”

“Only Flutters, here, could keep-up,” Boomer laughed, “And he had to cheat by flying straight—not following the turns in the road.”

“Master says ‘following the road is for the weak-minded,’ some of us fly to a different tune.”

“That much is certain, bird-brain,” Daisy arfed, “VERY different.”

“Why don’t you two take your conversation outside,” Sarah suggested, “Pepper and Buttons are out there waiting for you.”

After Daisy and Flutters left, Chris asked, “What’s the plan?”

“Overall, it’s to make Apoloni-DeSantino Enterprises unable to supply us with cars,” AJ replied, “But Linda and Dad must maintain their presence at Lakeview Motors consistent so they continue their efforts to bring in cars.”

“You two, AJ, and One-Eye must do everything you can to stop deliveries here,” Boomer began outlining the plan, “First you go after overland shipments.”

“By your new enterprise: XCCL Satellite Radio. It is a van equipped with sophisticated transceivers, able to broadcast a wide range of music, news, weather and traffic reports—all automatically broadcasted by CyberSatelliteServices. In addition it has the ability to scan for and sort-out keywords to find Apoloni-DeSantino Enterprises communications.”

“And after we find them?”

“That’s where the fun begins, you’ll be able to locate the recipient of the message.”

“But no one here sounds like Gina or Bambi.”

“I do,” a voice was heard as the door opened.

9 Responses to A voice was heard as the door opened…