PREVIOUSLY: “I do Captain—I wouldn’t ask if getting those vehicles to Grand Marais weren’t so important. I’m sending a boat with master mechanic and spare parts out as soon as possible. It’s a Crusader-Class converted fishing boat.”

Georgie then contacted AJ and Braddock—both grinned widely as this would allow them to approach the Autoworld boat without suspicion. They set out for Whitefish Bay ten minutes later.

MEANWHILE—Molly and Cob were on the bridge of the Jason Everett Martin… “We just received word that the transport has engine problems, and has been ‘told by Gina’ to hug the shoreline off Whitefish Bay.”

“Excellent, Molly—that will give AJ and Braddock more time to get in position to ‘assist’ them—and us to get in easy range for the ‘copter.”

Season 13—Adventure 1—Return of Chris & Sarah—Episode 13… Boomer, Flutters and Linda were on the beach as Linda’s modified Crusader began her high-speed run to Whitefish Bay, “Look at that girl scoot! That should be me piloting that boat.”

“Well—it’s not your boat anymore.” 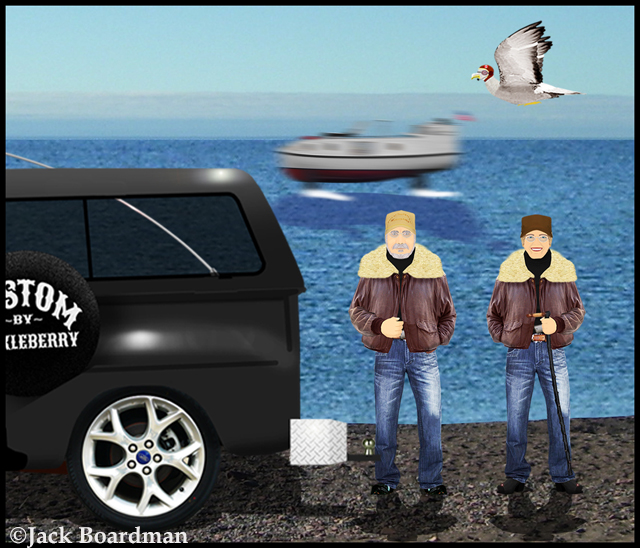 “Well—it’s not your boat anymore.”

“She cloned your boat. In fact, the improved original Skeedaddle is on her way to Hidden Cove as we speak.”

A FEW HOURS LATER—As bad luck would have it… the Lucky Lady was patrolling, her captain not having received orders from his bosses was operating on his own, without direction—when, “Willya lookit that?” 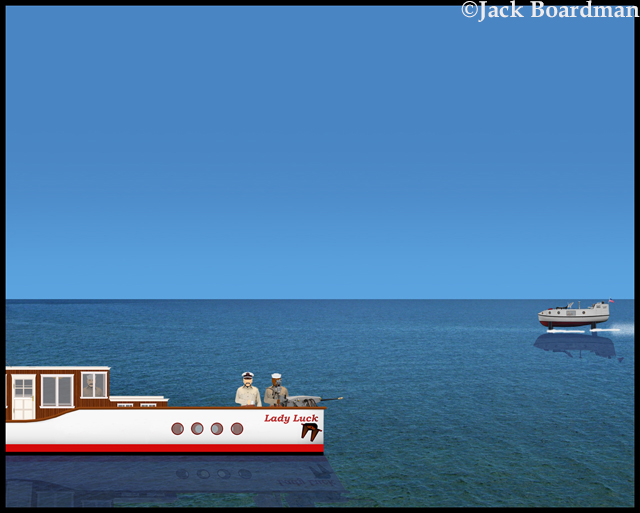 The one thing the Lady Luck didn’t have was a combat radar—fortunately the Crusader Rabbit had such a radar. AJ locked-on and hastily fired the 40mm autocannon. 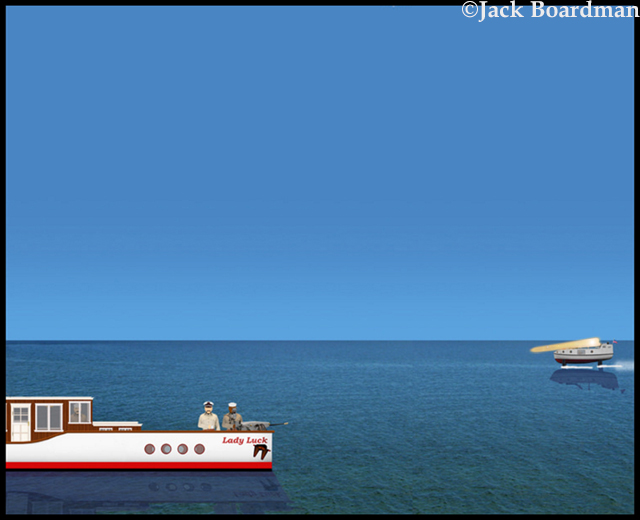 The shot missed by a hair—still, a miss is a miss, right?

However, it made Captain O’Reilly and crew hesitate, and that hesitation allowed the Rabbit to speed out of range—and sight of the Lady Luck.

O’Reilly attempted to contact his bosses for instructions—and FINALLY they answered his transmission, “Go ahead, Captain, I read you loud and clear,” Gina’s voice responded.

“We just observed one of those Crusader Class boats—it was up on hydroplanes!”

“Impressive, headed in what direction?”

“Uplake—towards Whitefish Bay. It fired on us with a large turret-mounted gun!”

“It missed, obviously. Thanks, Captain. We can’t worry about that boat—unless it comes back after you. We have another, more pressing problem—the Superior Princess has not been heard from for more than eight hours. We need you to head for her last known position.”

“Okay, as long as it is nowhere near that hydroplane and turret-equipped Crusader, we’re fine.”

Georgie laughed—off-mic, “I LOVE it when a plan comes together.”

7 Responses to “I LOVE it when a plan comes together”