PREVIOUSLY: “We just observed one of those Crusader Class boats—it was up on hydroplanes!”

“Impressive, headed in what direction?”

“Uplake—towards Whitefish Bay. It fired on us with a large turret-mounted gun!”

“It missed, obviously. Thanks, Captain. We can’t worry about that boat—unless it comes back after you. We have another, more pressing problem—the Superior Princess has not been heard from for more than eight hours. We need you to head for her last known position.”

“Okay, as long as it is nowhere near that hydroplane and turret-equipped Crusader, we’re fine.”

Georgie laughed—off-mic, “I LOVE it when a plan comes together.”

Season 13—Adventure 1—Return of Chris & Sarah—Episode 14… in less than an hour the Crusader Rabbit approached the MV Jason Everett Martin and retracted her hydroplanes and came alongside. As she slowly moved to the Martin’s bridge, Captain Molly Halloran and Master Chief “Cob” Pettigrew stepped out on the deck, “Braddock Farkleberry, you old lake-dog, howareya?” 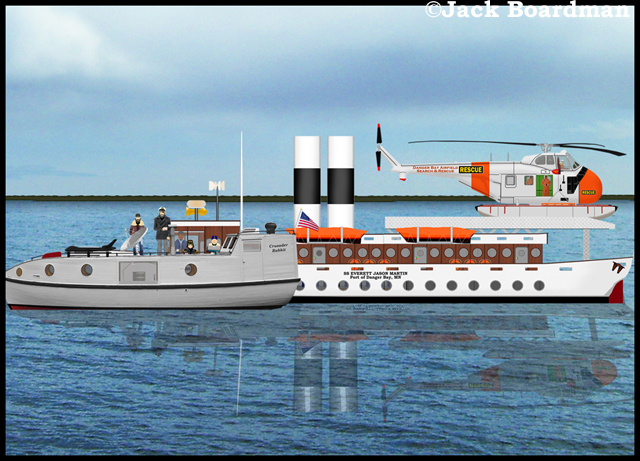 “There’s nothing quite so moving,” Molly Halloran laughed, “As a couple old salties expressing their love.”

“I know it brings me to tears,” AJ quipped, “We’ve not had the pleasure, Captain, AJ Boardman—serving as the entire crew aboard this vessel.”

“I am, an accident of birth,” AJ Replied, “You look familiar.”

“Very likely, considering I am the first female character you RW father ever drew.” (This is true, GENTLE READER, for those of you who were once on Active Rain, Molly was first presented on the old “Codger Blog” in 2007).

“We’ll move into position to launch our drone,” Braddock replied, “It has no explosive charge, but is designed to dive beneath the surface of the lake and strike and puncture the hull. The sound the crew will hear is the same as striking a submerged rock. The best option for the boat then is to run it aground along the lakeshore.”

“That way,” AJ added, “They can save the crew and cargo—if not the boat itself.”

“I believe we’re close enough right here to provide quick rescue-helicopter response—about 30 minutes from the shoal where the boat will likely run aground.”

“That’s right,” Braddock agreed, “We don’t want you arriving too soon—or too late. We’ll be on our way now—we have a ‘rock’ to launch.” 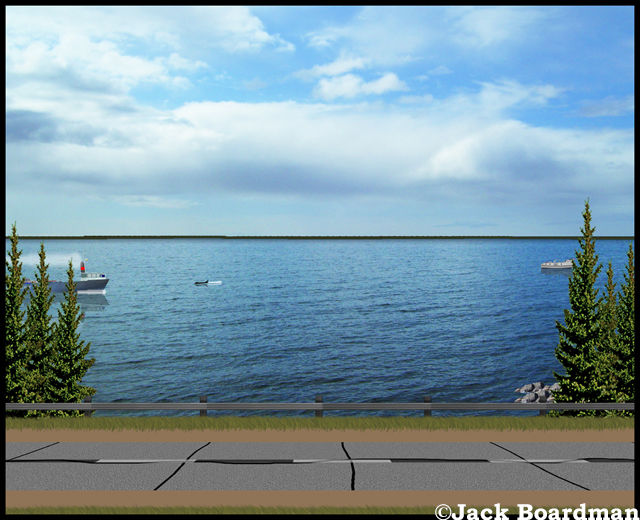 It performed as expected—and punched a hole in the hull of the Autoworld Transit 2, and the captain reacted—also as expected, “Beach this boat, helmsman, NOW!”

He followed orders—and ran the boat onto a rocky-shoal and sealing her fate.

Her hull ripped wide-open, she began to slip off the shoal and into the lake—seventy-five feet deep.

The Autoworld Transit 2 had no lifeboats.

7 Responses to “I’m better’n you’ll ever be, Coast Guard puke!”