For some time now I’ve wanted to rebuild “Downtown Port of Danger Bay, Minnesota,” to reflect its original appearance—or a close approximation thereof.

After many, many, hours of work—I’ve done just that!

Danger Bay’s modern era started during the late 19th Century—but, it wasn’t until the 1930s that a typical small town took shape with a defined downtown along US Highway 61. The portion of the highway which ran through downtown was named “Silverthorn Avenue,” and the portion out-of-town along the bluff was named “Farkleberry Road,” to honor the founders of The Port of Danger Bay.

I started with the Danger Bay Downtown peninsula as depicted in the banner above—and then a close-up of just the downtown section as shown in the image below. 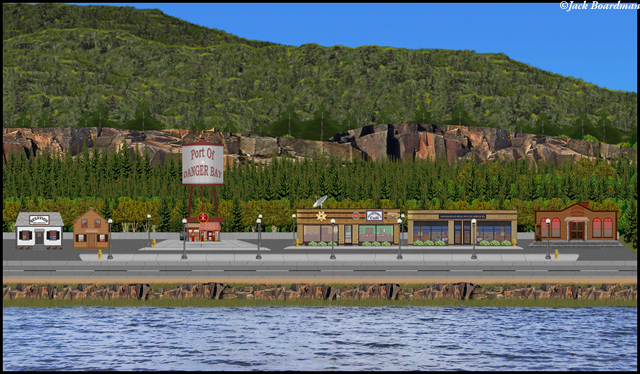 UPDATE: As I looked at the previous Banner illustration, it became clear that the image buildings were too large for the scenery & highway.

Shows one new business, after all, there MUST be a bar on the town’s main drag, RIGHT?

Sezavich’s Smoked Fish was returned to its old location to make room for the bar.

As you can see, the old banner left-out a lot of important details, and when compared to the new banner above, didn’t show how Scenic US 61 climbed the bluff.

The master of this image is 45” wide, and is divided into layers to be assembled allowing me to place people, cars, and whatever else I need to pace behind store counters, gas station islands, and in buildings, etc., as required by the storyline.

I sincerely hope you enjoy this returning to our roots effort as much as I enjoyed making it.