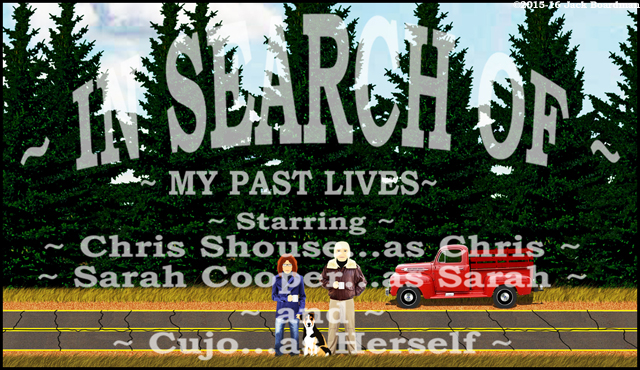 PREVIOUSLY: “That sounds like good common sense to me.” Sarah smiled, “Chris is pretty fast herself. I wonder who is the fastest. You are both left-handed it would be interesting to see.”

“Is that a challenge Miss Sarah?” The thought of a woman being able to beat him was ridiculous of course but he would humor them. “Tell you what tomorrow is Sunday so the bank is closed.  How about we meet in the woods on the outskirts of town and do a little target practice.”

“Sure,” Chris replied, “That would be great fun. Are there any wedding bells in the future between you two?  I don’t mean to pry but you do seem perfect for each other.”

Abigail blushed and replied, “Dalton spoke with my father last night and got permission to ask me.  We have not set a date yet or really made an announcement so I hope you will keep it our little secret until such time as we make a formal announcement.”

Sarah and Chris both agreed and the rest of the dinner went very well with just chit-chat.

Upon parting, they agreed to meet in the woods after church.

Flashback—Episode 2—Dalton’s target range in the woods… The next morning dawn bright and clear.  Sarah and Chris did not attend church but when the bells rang loudly they knew services had started and they had a couple of hours to get things set up.

They found a clearing that had boulders and fences and a couple of big tree-stumps, it was almost as if someone had set this up perfectly for what they had in mind.

Over breakfast Chris and Sarah decided an actual gunfight might not be the best way to go. So they devised a plan.

The saloon, not being busy that morning, with the patrons at church (it would be booming in a few hours though). The barkeep had supplied them with everything they would need.

Chris and Sarah had also made four fairly large signs with bulls eyes on them.

When they found the meadow beside the road they were delighted.  There was a fence just far enough away from two tall tree-stumps for a fair test of marksmanship, “This is perfect and it will be totally equal and fair to both of you.” 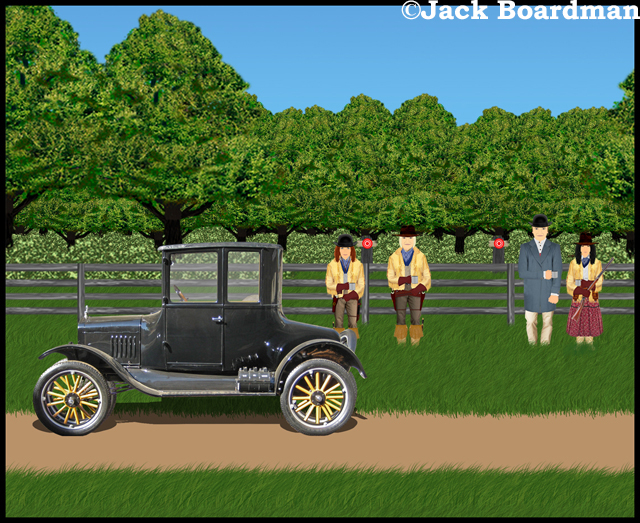 They set about putting up a target on each tree. Chris checked it over and was well satisfied at their results, “This perfect Sarah, your plan is a good one.”

Sarah had to agree and nodded her approval.

Riding back into town to get Dalton and Abigail Chris felt exhilaration rushing over her.

Not only did she love to shoot but it was almost a certainty that she was shooting against her own self—it was almost enough to boggle the mind.

Abigail and Dalton followed them to the clearing in his automobile.

“Hmmm,” Chris thought, “Horseless carriage? Fitting for the banker of the town.  She could not help humming to herself,

When I take you out in the surrey,

When I take you out in the surrey with the fringe on top!

Watch that fringe and see how it flutters

When I drive them high steppin’ strutters.”

“Dang,” Chris thought, “Now that song will be in my head all day.”

As they pulled into the clearing Dalton was very impressed with the setup.  With both being left-handed the way it was laid out gave them both plenty of space to shoot—neither had an advantage.

Sarah, stepped between the two and said, “First, it’s only fair to have you both fire three practice rounds—to range into the targets. After that, you will draw and fire three rounds; the one with the tightest shot-grouping will be declared the winner.  Any questions?”

Dalton and Chris both shook their heads.  Abigail gave Dalton a quick kiss on the cheek and whispered, “Good Luck my love.”

Dalton beamed at her.

Sarah and Abigail moved over out of the line of fire and held on to the horses reins so they did not panic, not that Sarah and Chris’s horses would and they didn’t worry about the horseless carriage—other than the fact that dang song was playing in Chris’ head.

After they fired their respective test-rounds—both had nearly equal shot-groups, Sarah replaced both targets.

Chris and Dalton drew and were in total sync with each other the targets on each of the trees bore 4 bullseyes, with two rounds just slightly out of dead-center.

Chris was not surprised at all and had her validation that Dalton was she.  Dalton was shocked that a woman could shoot that well.

They had a great time. Nothing was mentioned about the challenge as Dalton’s father did not approve of guns.

By the next morning they were gone from 1910!

Blogger and Internet Marketer. I live in the middle of the Mojave Desert. Love helping people obtain freedom in their lives. Both personal and financial .
View all posts by Chris Shouse →
This entry was posted in 1910 Kansas, Season 13—Adventure 1—Return of Chris and Sarah and tagged 1910 Great Bend Kansas, Computer Art, Fiction, Photoshop Art, Serial Melodrama. Bookmark the permalink.