Season 13—Adventure 10—Episode 7, Scene 1… Danger Bay Jail… While the rest of the Rootin-Tootinist Posse remained outside, Wyatt & Chris delivered the outlaws to the city marshal’s jail cells. Much to their surprise, they found Debra and Joey serving as City Marshal & Deputy City Marshal, respectively, “What? How?” 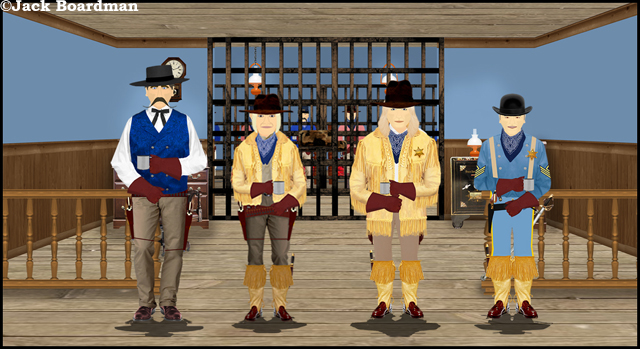 “Wyatt, right?” Debra replied, “We were dragged into 1873 quite by surprise—and they made us an offer we couldn’t refuse.”

“As we were quite broke,” Joey added, “And Debra called ‘dibs’ on marshal first!”

“And that’s a GOOD thing?” Joey asked, “I really HATE to rely on liars—er—lawyers to save my butt!”

“Not necessarily a good thing,” Wyatt replied, “As a multi-century lawman I know it’s easier to get a conviction in the 19th Century. Hanging an innocent person is wrong in any century. There are no do-overs.”

“I can’t argue with that,” Joey conceded, “But still…”

“’But still’ my flat-brimmed hat,” Wyatt interrupted Joey, “Just because you’re a bit of a hell-raiser, doesn’t mean all lawyers are liars—just the ones who managed to hassle you? C’mon, we have some fine attorneys in Moosehead County, the folks at Lepus and Jones have had a lot of success defending hell-raisers just like you. Remember them the next time you run afoul of the law DEPUTY MARSHAL!”

“There’s a stagecoach pulling-up outside,” Debra heard the tell-tale sound made by a coach, “There are none scheduled.”

Moments later… a long-haired fellow dressed in buckskins over a bright red vest and a gentleman’s white shirt with a string-tie ambled in, “James Butler ‘Wild Bill’ Hickok—as I live and breathe—it’s been a long time!” 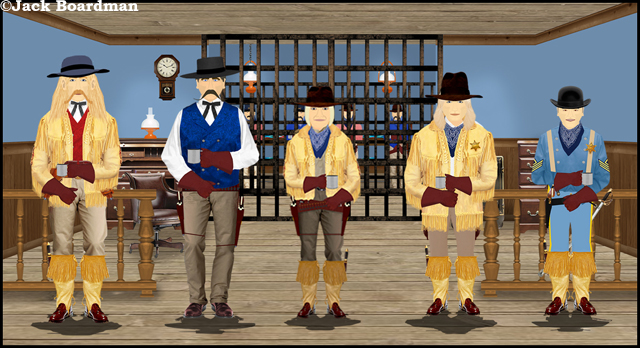 “It certainly has,” Wyatt agreed, “Are you back in Moosehead County to stay?”

“Yes,” Hickok replied, “Cujo dragged me here to help you out—she said my fast guns will come in handy.”

“We’re trying to learn why most of the good citizens of the county have disappeared—there seems to be no explanation.”

“She told me to tell you it is because of someone she referred to as ‘the Crow Rider’ has returned.”