PREVIOUSLY: She dismounted looked in all directions with her helmet off—for better visibility.

She heard no one.

After they got the “all-clear” from Chris—the rest of the Rootin-Tootin Bike Club followed close behind. ­

They each had a two-way, digital radio in their helmets, so they were in constant communication with one another.

Episode 2—Scene 3… At the Dewdrop Inn… They simply HAD to stop here at the Dewdrop Inn—Debra became weary of Joey’s repeated complaint, “I’m hungry—can’t we stop for lunch?”

Boomer had the same strong hunger—which he was now glad he kept to himself.

Episode 2—Scene 4… On the highway—thirty miles behind… “You said, ‘They ain’t gonna be on the road for hours.’ So WHY haven’t we caught-up to them—yet?”

“No Debra, my burger was overdone and my fries were soggy.”

“No Debra, my burger was overdone and my fries were soggy.”

“Geeze, Joey,” Boomer laughed, “You take extended road-trips all the time—you can’t tell me you’re not used to roadside food-fare.”

“And a fine job you are doing,” Boomer quipped, “I’m glad you’re complaining—so I don’t have to.”

“I’m more than ready,” Debra laughed, “The ‘Bickersons’ were becoming a little too much.”

“Who IS she talking about?”

“I have no idea, Joey,” Boomer replied.

The Rootin-Tootin Bike Club were on the road and around the bend moments before the “Badass Biker Association” pulled into the Dewdrop Inn.

Episode 3—Scene 2… Meanwhile—in Danger Bay at the Cabin-on-the-Rock… The left-behind members of the Rootin-Tootin Posse were gathered, “Okay Mac, our friends are having an adventure—perhaps we ought to have one as well.” 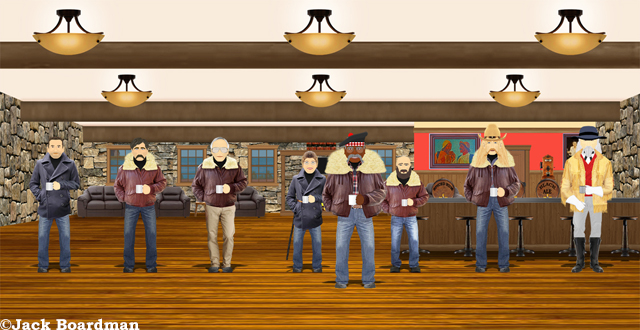 “How about in the Rocky Mountains?” James Butler Hickok suggested, “It’s been years since I’ve been there.”

The rest of the “Left Behinds” agreed.

“Okay,” Mac replied, “that will be quite a caravan.”

“Not really,” Wyatt grinned, “C’mon outside.”