PREVIOUSLY: Tommy and three others were only a mile behind the Rootin-Tootin Bike Club bikers—and soon found them—stopped at Smith’s Grille.

“Have you LOST YOUR MIND?”

“We go in and act all friendly-like—to start with,” Brian said, “Find-out what we can, and then, maybe, suggest we ride together.”

The other two agreed with Brian—overruling Tommy.

For the time-being, at least. 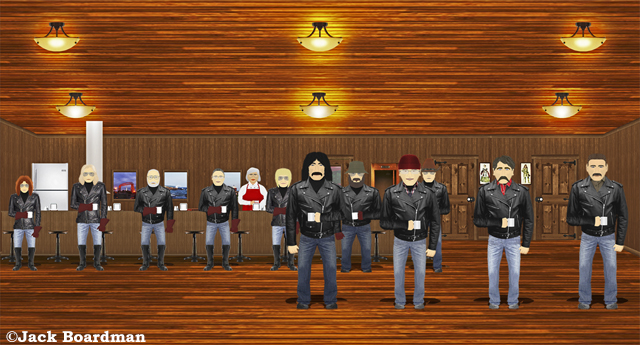 Left unsaid by any of the good guys—is a creeped-out feeling all shared. Without a word spoken—all were instantly wary.

“We’re just following our whims as we ride,” Debra replied.

“…And looking for trouble,” Joey ominously smiled, “We feast on trouble.”

“Oh yeah,” Brian replied, “We’re down with that. Maybe, we should ride together—safety in numbers. There are some ruffians flying the Jolly Roger flag—just like ours. They are NOT part of our club.”

“And we can believe you—because?” Debra asked.

It is at this point—were Boomer writing this—he would turn to you and say:

Do you really believe these guys—GENTLE READER?

But, I’ll just pass on that, because the lady behind the counter said, “You folks could to worse than hooking-up with these fellows—all four are good guys.”

Episode 7—Scene 2… Outside Smith’s Grille… “I hope our people-dogs don’t ride with those guys.”

“Me too, Buttons,” Daisy agreed, “They said some things that made me uneasy.”

“Maybe we ghost dogs should float within earshot when they get back on the road,” Pepper suggested. 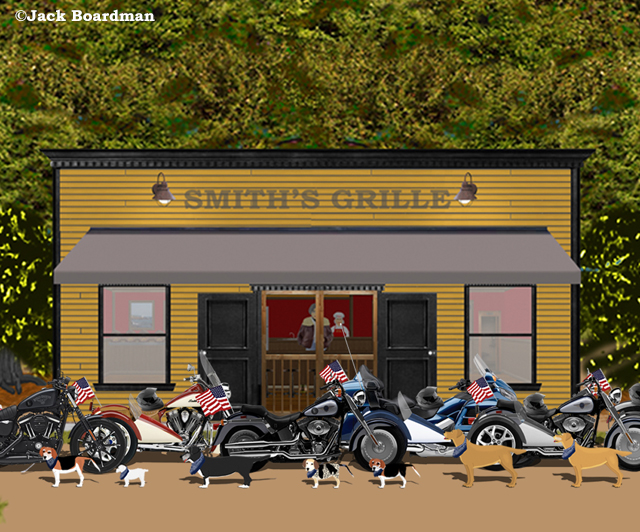 It was a done-deal—the ghost dogs would ‘ghost’ the Jolly Rogers—and have a great time doing it!

2 Responses to “Howdy folks, you’ll like the food here…”