“What seems to be the problem, Trooper?”

PREVIOUSLY: “I hope our people-dogs don’t ride with those guys.”

“Me too, Buttons,” Daisy agreed, “They said some things that made me uneasy.”

“Maybe we ghost dogs should float within earshot when they get back on the road,” Pepper suggested.

It was a done-deal—the ghost dogs would ‘ghost’ the Jolly Rodgers—and have a great time doing it!

Season 15—Adventure 6—Bikers—Episode 8—Scene 1… On the Mountain Forest Highway… “Alright, everybody step-out of the van,” the taller of the two troopers commanded, “NOW!”

“What seems to be the problem, Trooper?” AJ, the last to exit the bus, asked. 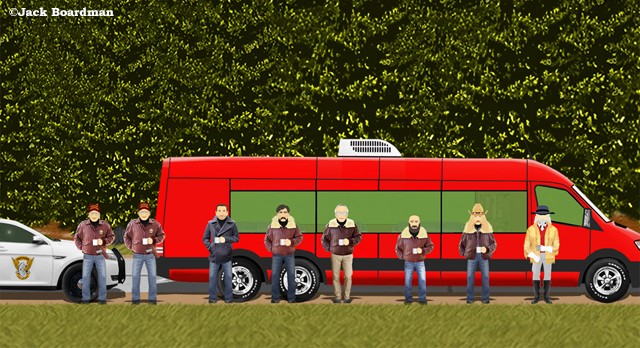 “What seems to be the problem, Trooper?”

“Just shut-up and do as you’re told,” the shorter of the two replied, “line-up beside the van—now!”

The troopers patted everyone down, and finding no weapons, ordered them back into the van—accompanied by the shorter trooper, “What does the Colorado State Police want with us?”

“Who said we were troopers?” the taller one smirked, “GET IN THE BUS!”

Episode 8—Scene 2… Inside the Adventure Van… AJ was told to follow the squad, and once they were underway, Wyatt asked, “What do you want with us?”

“A Mr. McGinty wants to have a few words with you—that’s all you need to know,” their escort-the short “trooper” replied, “You might survive the conversation—if he likes your answers.”

Linda very-quietly opened the door directly behind the “trooper,” pressed her Colt .45 pistol against his back as said—very-quietly, “No sudden moves, dipstick—or you’ll die.”

“Thanks Pepper,” Debra replied, “At our next stop, we’ll spring a little surprise on our new ‘friends,’ read that as sarcasm.”

A short time later, Debra called for a brief break, and the bikers pulled off the road.

Seconds later, the Posse got the “drop” on the Jolly Rogers, as they (for the first time during this adventure) pulled their side arms, “Freeze, gentlemen—if you value your miserable lives.” 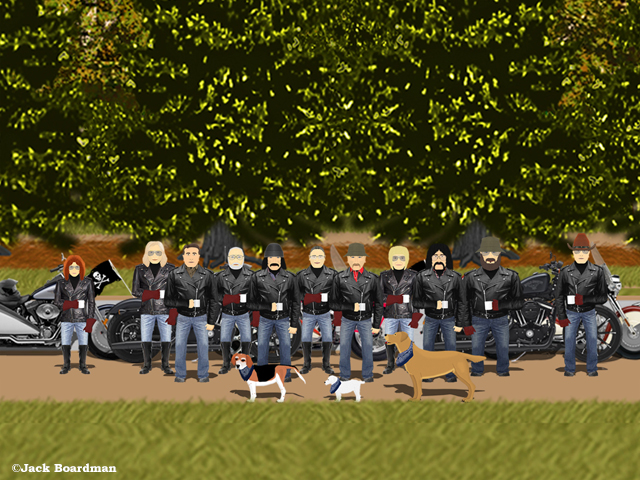 4 Responses to “What seems to be the problem, Trooper?”