With a whimper—not a BANG

PREVIOUSLY: AJ was told to follow the squad, and once they were underway, Wyatt asked, “What do you want with us?”

“A Mr. McGinty wants to have a few words with you—that’s all you need to know,” their escort-the short “trooper” replied, “You might survive the conversation—if he likes your answers.”

Linda very-quietly opened the door directly behind the “trooper,” pressed her Colt .45 pistol against his back as said—very-quietly, “No sudden moves, dipstick—or you’ll die.”

“Thanks Pepper,” Debra replied, “At our next stop, we’ll spring a little surprise on our new ‘friends,’ read that as sarcasm.”

A short time later, Debra called for a brief break, and the bikers pulled off the road.

Seconds later, the Posse got the “drop” on the Jolly Rogers, as they (for the first time during this adventure) pulled their side arms, “Freeze, gentlemen—if you value your miserable lives.”

Season 15—Adventure 6—Bikers—Episode 9—Scene 1… At a clearing off the highway… “So—how is it WE got the job of guarding these guys?”

“Payback for something we said—or did, Boomer.” 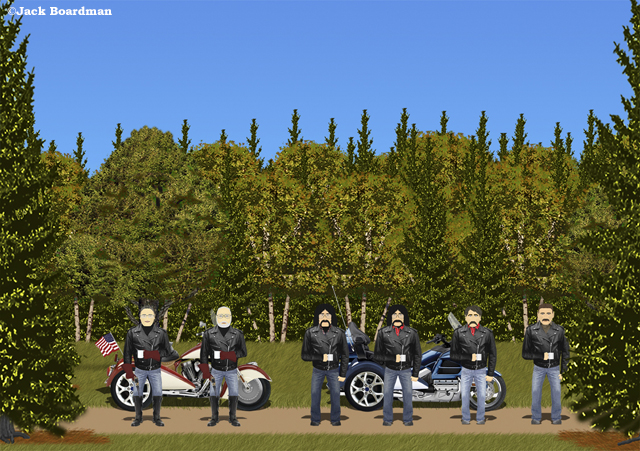 “Will you two quit bickering?” One of the prisoners asked.

“Does it bother you that much?” Boomer asked.

“To add insult to your injury, fellas,” Boomer grinned, “You can expect the rest of your crew to show-up here, as well.”

Episode 9—Scene 2… At Smith’s Grille… Leaving one of their number behind—to make noise by revving his bike—the rest of the Jolly Rogers moved quickly to near the back door of Smith’s Grille.

They drew their weapons and waited for the biker out-front to join them. 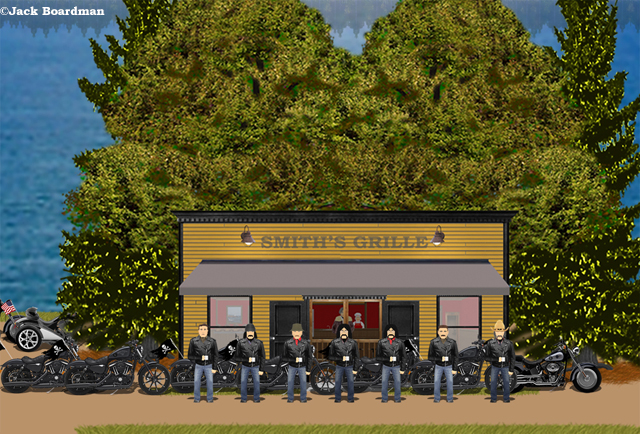 They drew their weapons and waited

“This going to be so sweet,” the pack leader said, “Knocking-off them do-gooder-bikers will give us highway creds—big time!”

“Ain’t nobody gonna give us no shit no more,” the nameless biker standing to his left chortled.

“Here he comes—get your guns out, and chamber a bullet.”

Episode 9—Scene 3… Still at the Grille… The door formed a “defile” causing the Jolly Rogers to enter in single-file—as they entered they faced five grim-looking bikers—with guns aimed and ready to shoot.

—with guns aimed and ready to shoot.

Each wisely dropped their gun until all stood there looking—and feeling foolish.

“A ride, that if I have my way,” Sarah wickedly grinned, “That won’t end well for you.”

And so, this ADVENTURE has concluded—with a whimper—not a BANG—but our STORY? To be CONTINUED…

1 Response to With a whimper—not a BANG