PREVIOUSLY: Boomer, over the STRONG objection of Joey, was assigned as the team quartermaster, “But, I want to pull the trailer!”

“Aw—dammit!” Joey replied, “I forgot to have a hitch installed.”

“So, Joey, what job did Debra assign you?”

“It can’t be that bad,” Boomer laughed.

With amazingly little grousing by Boomer and Joey—they got through the evening meal, and the necessary clean-up.

“Well,” Debra smiled, ever-so-slightly, “You two have been cooperative—thus far. What’s up with that?”

“Too tired to grouse,” Joey replied, “Keep the wine and ale flowing.”

Just as Joey finished speaking, the unmistakable sound of two-cylinder motorcycle motors caused all to look towards the highway.

At least ten bikes flying the flag of the Jolly Rogers passed the entry. 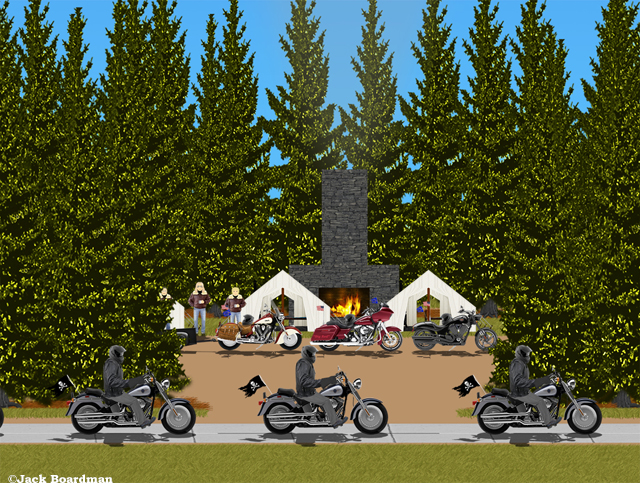 “If they did—they’ll be back, Debra,” Linda replied, “It’s time to get our guns.”

Episode 2—Scene 2—Smith’s Grille… “Hey guys—we just passed a campground. Might be a good place to stop for the night.”

“Naw, Hank,” Jeb replied, “There’s a bar down the road, and I have a powerful thirst!”

They found the perfect place in Smith’s Grille. There they could satisfy their desire for beer & food. Next door was a dive motel—just perfect for these guys! 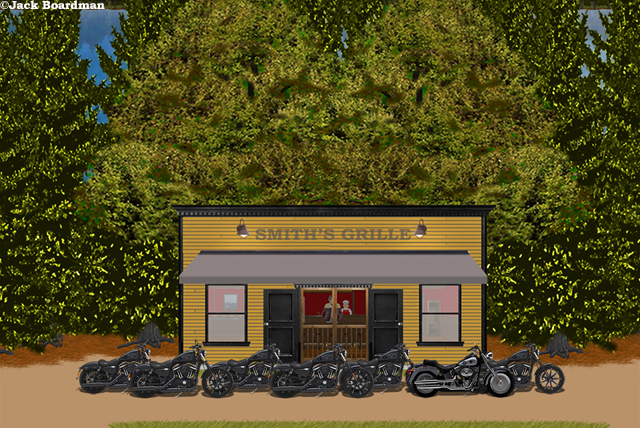 They found the perfect place in Smith’s Grille.

“So, guys,” Jeb questioned, “What are our orders for when we catch-up to them goody-two-shoes do-gooders?”

“You wanna get paid?”

“I worry that ‘payment’ might be a life-stretch in the crossbar hotel.”

“You worry too much, Jeb. Lighten-up.”

Episode 2—Scene 3—On the Desert Road… In theory—the Adventure Bus didn’t need to stop at a motel—having quarters for all aboard.

But, sometimes it’s desirable to have the more spacious quarters provided by almost any motel. By a vote without dissent—they decided to stop at the “Red Roof Motel,” and rent several cabins. 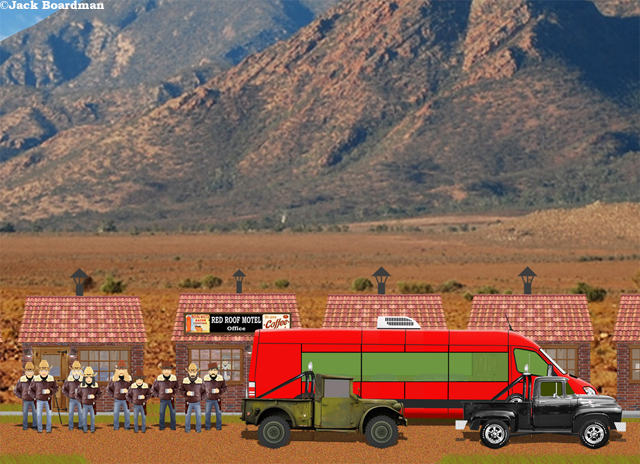 …They decided to stop at the “Red Roof Motel…”

This may turn-out to be a big mistake.

6 Responses to “That’s a little extreme.”