An episode in images…

PREVIOUSLY: The Adventure Bus was heading to meet-up with Wyatt Cooper & Company—when they received a message from them. They’d been in combat with a large number of Jolly Rogers, and one of the wounded bragged before expiring, that there were dozens of their riders heading down the highway.

Since there was but one highway, that spelled big-time trouble. They quickly devised a plan: They would hide the small trucks behind the hill and leave the bus on the shoulder with its emergency lights flashing.

They arranged themselves in a skirmish-line out of sight in the tall weeds.

And then the diminishing sound of Harleys leaving in both directions away from the bus.

Finally—they heard voices from near the Adventure Bus.

Season 15—Adventure 7—ADVENTURE BUS—Episode 9—Scene 1—On the Desert Highway… There were at least ten Jolly Rogers arrayed on either side of the Adventure Bus—and moving towards the hill.

As they advanced, another ten came from behind the bus, “We know you’re up there—do us all a favor and show yourselves.”

“We will, soon enough,” Wyatt Earp, IV, replied, “And when we do—your number will be less.”

As the Jolly Rogers advanced, they began taking casualties. 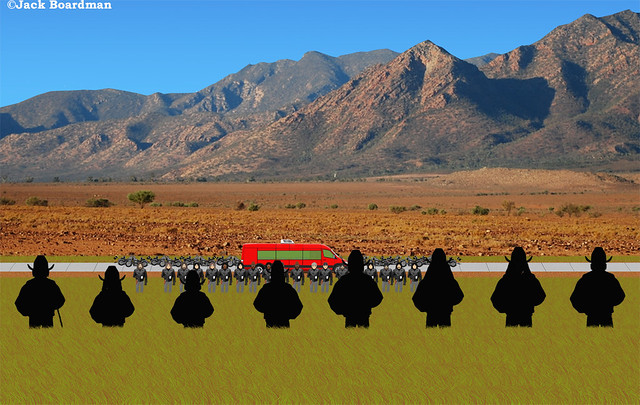 The Jolly Rogers continued to climb the hill as more arrived to participate in what they thought would be a “turkey-shoot.”

And they continued to take casualties.

“Surrender now—and we’ll kill you quickly—one shot to the head.” 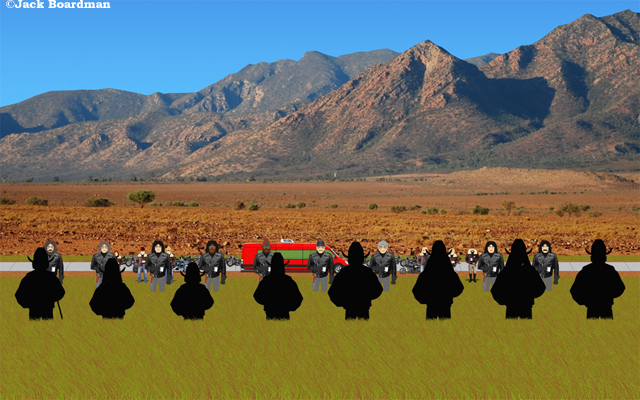 “You fellas ought to look behind you,” Wyatt replied. 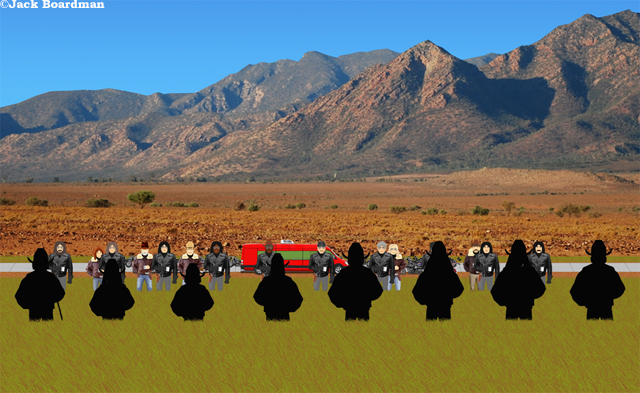 “You fellas ought to look behind you”

“Yeah—right,” the leader of the Jolly Rogers sneered, “Like we’d fall for that.”

“Hello,” Chris said in her sweetest voice—as she stuck her .45 against his ribs, “You fellas ought to surrender now.”

They surrendered—they had little choice.

Episode 9—Scene 2—Deserton… The ten Jolly Rogers were stuffed into the US Marshal’s van for transport to the Maricopa County Courthouse, accompanied by Wyatt Cooper and the Rootin’ Tootin’ Bike Club. 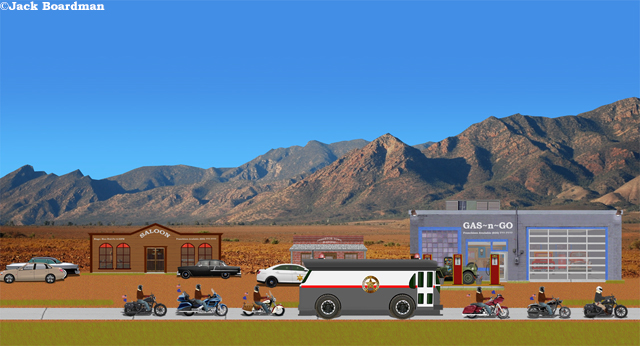 The Adventure Bus folks planned to meet them outside of town. All had been deputized for the transfer.

Will they arrive in Phoenix?

And so, this ADVENTURE has concluded—but our STORY? To be CONTINUED…

8 Responses to An episode in images…