The Jolly Rogers were on a mission

PREVIOUSLY: The ten Jolly Rogers were stuffed into the US Marshal’s van for transport to the Maricopa County Courthouse, accompanied by Wyatt Cooper and the Rootin’ Tootin’ Bike Club.

The Adventure Bus folks planned to meet them outside of town. All had been deputized for the transfer.

Will they arrive in Phoenix?

Season 15—Adventure 8—Long Road—Episode 1—Scene 1—On the Desert Highway… The prisoner transit van was on the road—enroute to the Phoenix Maricopa County Courthouse, where the prisoners were to be arraigned on several charges—not the least of which was murder in the first degree.

There were US Marshal’s cars driving in the front—and rear of the van. 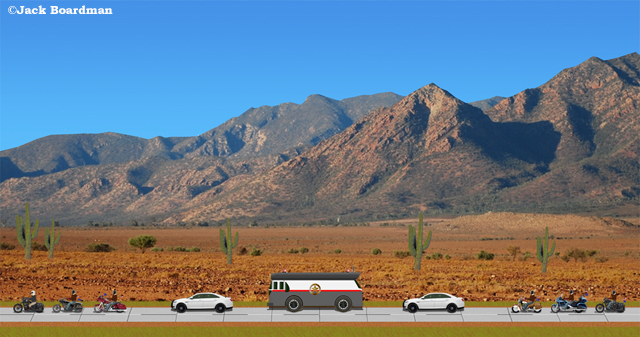 There were US Marshal’s cars driving in the front

The, now deputized Rootin’-Tootin’ Motocycle Club members rode in front and behind the Marshals’ cars and van.

The Adventure Bus bunch had traded the bus for several relatively nondescript cars and trucks—leading and trailing the caravan by several miles.

Episode 1—Scene 2—Also on the Desert Highway several miles away… The Jolly Rogers were on a mission—they had to stop the marshals from reaching Phoenix. 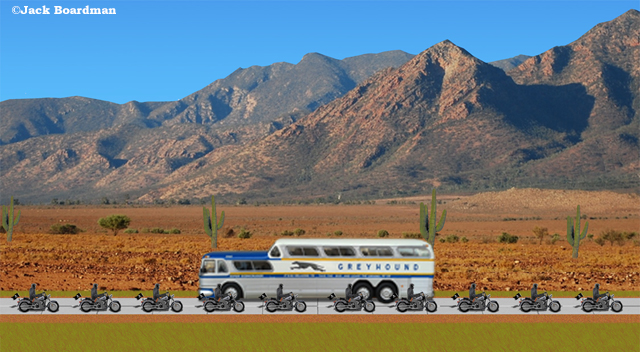 The Jolly Rogers were on a mission

“C’mon fellas, let’s pick-up our speed!” Raymond exclaimed, “That van is ahead of us and we gotta take them out!”

“Yeah, Ray,” Jimmy the Hammer replied, “We must beat Joe and his bunch!”

“You think they’re in front of us?”

“Oh—hell yeah,” Raymond asserted, “Our sources were there when they left Deserton.”

“Yeah—okay, but we know they’re a slippery bunch,” Jimmy replied, “How many Jolly Rogers have already been kilt or jailed by them people?”

“I get that. But, we have our orders and we don’t want to be crossing the big boss—he makes people disappear.”

This stretch of highway is seldom busy and the Jolly Rogers were taking advantage of that.

There were other members of the gang both behind, and in front of the marshal’s caravan. They were determined.

Episode 1—Scene 3—On the Desert Highway—a Far-Piece away… Sean McGinty (younger brother of William McGinty) was waiting at the side of the highway. Waiting and waiting and becoming increasingly impatient. 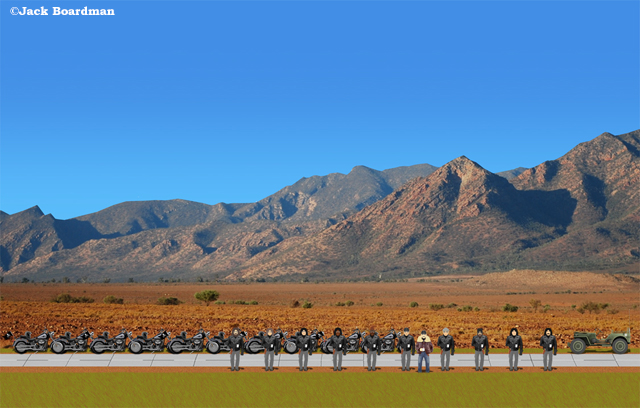 “Where have you been”? He asked, “Hanging-out at some damn biker bar?” Don’t bother answering—get everybody to my place. NOW!”

The Jolly Rogers gathered at Sean McGinty’s place by the dozens. Many more were on their way.

McGinty selected the location where he built his house very-carefully. To get to the trail leading to the house—a fifteen-mile trek across unmarked desert is necessary. 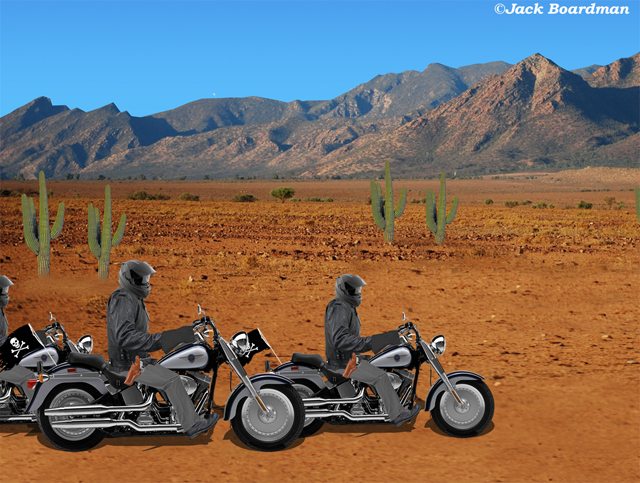 …and cross unmarked desert by compass

Some of them get lost, and are never heard from again.

Episode 1—Scene 4—Inside Sean McGinty’s place… “I called you ten in here first for a reason,” Sean McGinty began the meeting, “Because you each have shown your loyalty to our operations—and more importantly—the ability to lead. Of the hundred or more Jolly Rogers gathered outside, I want you each to select nine you can trust with your lives.”

“That should be easy enough,” Red Thompson replied, “What do we tell the others?” 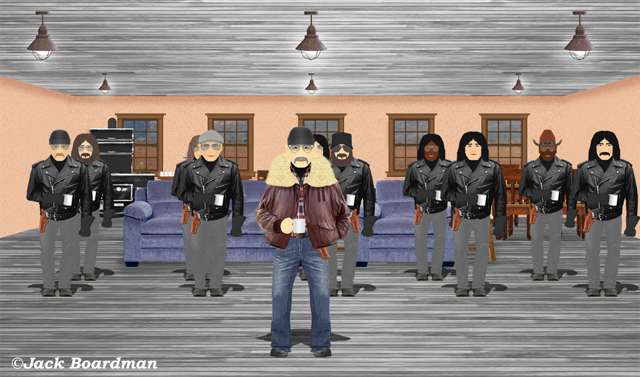 “What do we tell the others?”

“Thank them for showing-up and to stay in the area, as we may ask for their help later as things progress.”

“The Jolly Rogers aren’t exactly known for taking orders,” Jeff Wright asked, “What should we do if we get crap from one of our people?”

“Do you have a problem with that?”

“No—not really,” Wright replied, “I just wanted to make sure you were serious.”

4 Responses to The Jolly Rogers were on a mission