“Good enough for our purposes?”

PREVIOUSLY: “I called you ten in here first for a reason,” Sean McGinty began the meeting, “Because you each, have shown your loyalty to our operations—and more importantly—the ability to lead. Of the hundred or more Jolly Rogers gathered outside, I want you each to select nine you can trust with your lives.”

“That should be easy enough,” Red Thompson replied, “What do we tell the others?”

“Thank them for showing-up and to stay in the area, as we may ask for their help later as things progress.”

“The Jolly Rogers aren’t exactly known for taking orders,” Jeff Wright asked, “What should we do if we get crap from one of our people?”

“Do you have a problem with that?”

“No—not really,” Wright replied, “I just wanted to make sure you were serious.”

“Your wish is our command,” Andrew said—rubbing his hands together.

“Without knowing what it is?” 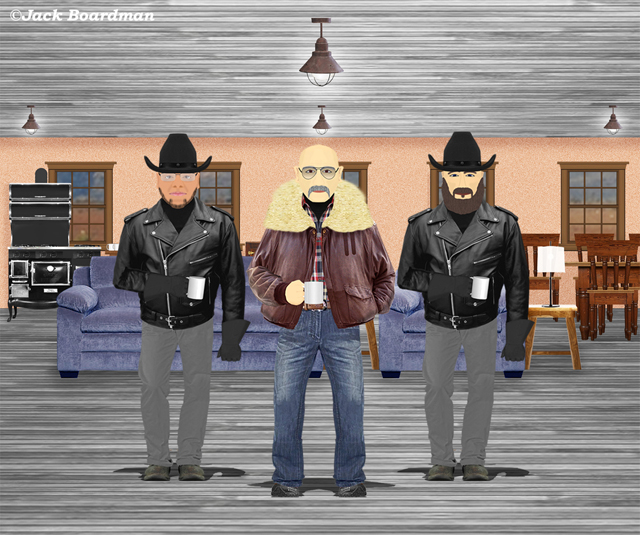 “I want you to assemble the best, most loyal, and ruthless bikers you know. People you trust with your lives. And—people who have no criminal records.”

“And do what? Take out the marshals?”

“No. Not immediately, anyway. I want you to offer your services to them.”

“Interesting,” Andrew replied, “We do have a good relationship with Officer Cooper and I understand he’s riding with some very-tough hombres.”

“I figured you’d pick-up on that. So—what are you two galoots waiting for?”

“For you to finish talking,” Alfonso laughed as he and Andrew headed for the door.

“Before you go—those ten bikers waiting outside? Give them a look—they’re good loyal guys.”

“Good enough for our purposes?”

“No—some of them have records, but some are record-free. They’re good enough to use as soldiers when you need them. They have been tasked with selecting ten soldiers each, you decide how to incorporate them into your operation.”

Outside—Andrew addressed the ten bikers, “We are your new bosses. I’m Andrew and this is Alphonso. You and your troops are now part of our little army. Shadow us—but remain a few miles behind.”

“I there anyone here who has no police record?” Alphonso asked.

Three of the bikers stepped forward, including Red Thompson and Jeff Wright.

The third biker was Becca Williams.

“The rest of you have our radio frequency,” Andrew said, “When we call come quickly, ready for combat.”

Episode 3—Scene 2—On the Desert Highway… It happened suddenly—one minute the prisoner transit van was running perfectly—the next the engine blew. The van coasted onto the shoulder and the escorts took-up a protective formation fore and aft of the van. 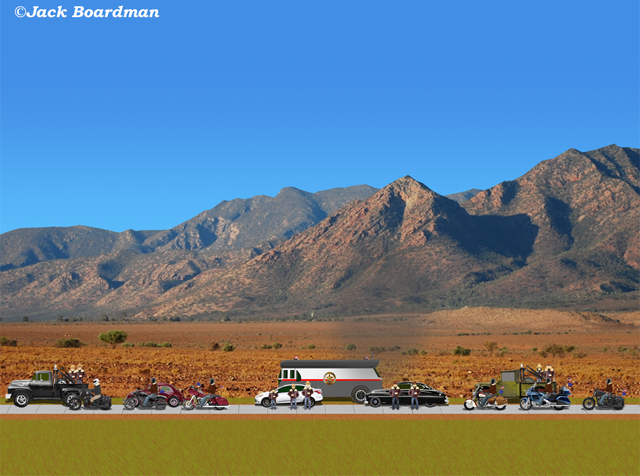 “We are prepared as well as we can be,” He replied, “This M60 machinegun we have is a great equalizer.”

Officer Wyatt Cooper had a plan—he quickly gathered the US Marshals and the Rootin’-Tootin’ Posse members—and explained his plan, “Leave two of your escort cars here, and with our cars—except the two pick-ups, take your prisoners and head towards Phoenix. Drive like tourists. I don’t have to tell you to secure the prisoners tightly.”

“Roger that,” the chief deputy replied.

With the prisoners trussed and bundled into the extra cars, the deputies set-out for Phoenix—with at least a mile between each car.

Episode 3—Scene 3—Above the Desert Highway… With the two M60 belt-fed machine gun-equipped pick-up trucks positioned to fire on the assailants Officer Cooper and the Rootin’-Tootin’ Posse folks were ready to spring their ambush.

When the ten Jolly Rogers arrived—they began shooting into the stalled van.

They were interrupted when the van’s loudspeaker sounded, “Surrender—or die! We have the high-ground and two M60 machineguns aimed and ready!”

In reply—the Jolly Rogers began firing their submachine guns towards the hilltop. 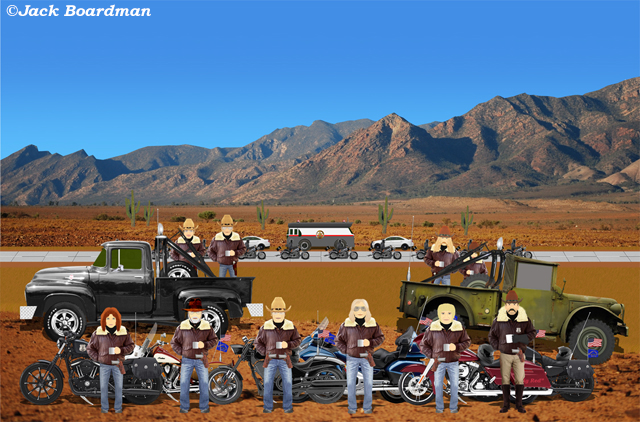 4 Responses to “Good enough for our purposes?”