PREVIOUSLY: This first cabin is mine, Joey.”

“Is that an outhouse behind the cabin?” Joey asked.

“Tell me there’s a bathroom cleverly hidden in the cabin.”

“Oh great! I don’t see any power lines running to the cabin. Why?”

“Okay—they’re buried so no one will see them.”

Season 15—Adventure 9—SEVEN—Episode 2—Scene 1—Inside Boomer & Joey’s Cabin… “Here’s our main floor—we can cook over the fireplace if we wish, or go outside to the shed and create gourmet meals there. There’s a complete wood-fired kitchen there.”

“Our main floor?” Joey seemed a bit confused (for good reason – after the crap Boomer heaped on him), “I thought this floor was your quarters.” 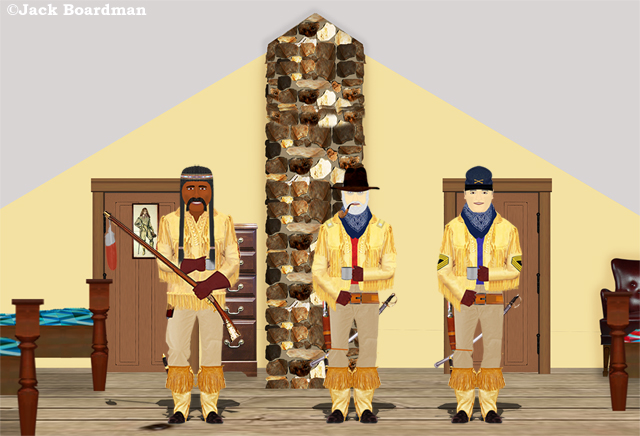 “Too often—and I continue to fall for it.”

“I was just jerking your chain—did it work?”

The upstairs had three beds—and a curiously marked door.

It had one of those too cute by half men’s room signs.

Inside, Joey found a large modern bathroom with all the accessories.

“Impressive,” Joey was smiling when he returned, “I imagine we all have such facilities?”

“Why has this never come-up in our past experiences in the past?”

“They were written in the old-time westerns fashion—nobody ever seems to need to use a bathroom. And too—you brought-up the matter.”

“Sure,” Joey replied, “Maybe we can learn something about our quarry.”

Episode 2—Scene 2—An hour later, inside the Brewster’s Corners Saloon & Café… Boomer and Joey instantly recognized Sean McGinty and his friends—fortunately, they didn’t recognize them, “Howdy, gents. A fine day.”

“It is,” Sean McGinty replied, “You a Civil War Veteran?” 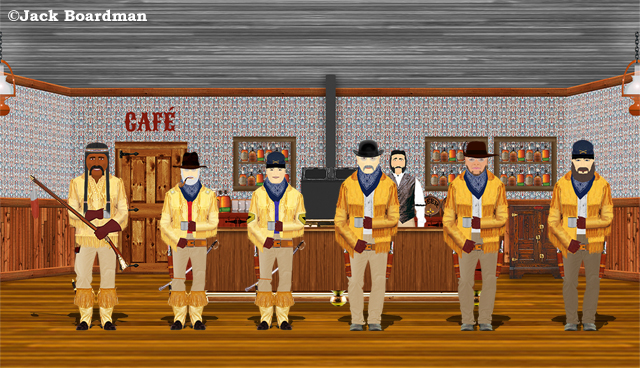 “Yup, those Indians did nothing wrong, except defend their way of life.”

“You fellas looking for work?”

“Didn’t he recognize them?” 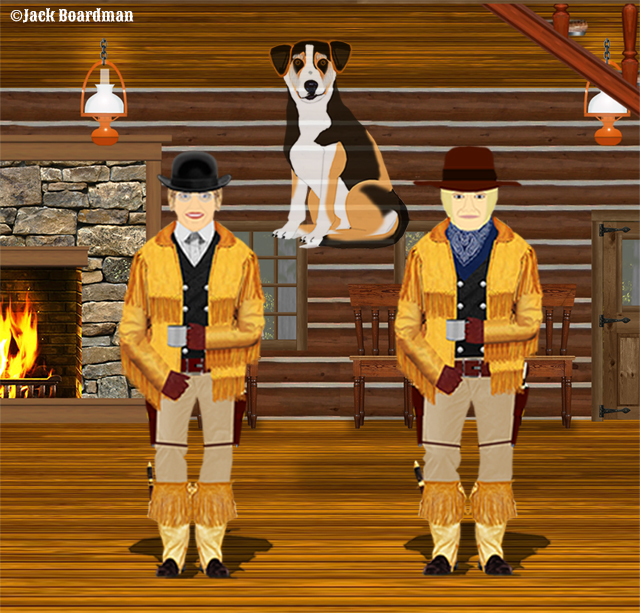 “Didn’t he recognize them?”

“No, Linda—I erased all of their memories of all of you.”

“I sent him half-way across the Milky-Way. I can’t completely rid the universe of him—I can just inconvenience him.”

“Because he’s part of me—my dark side.”

“So, where are the bad guys?” Linda asked.

“Brewster’s Corners, about ten miles south of here. Boomer & Joey are there now. Joey brought Ghost-Dog Mattie along—she will keep you in the loop about their plans.”

“Why did they go there without orders?” Linda asked.

“I’m guessing because they were bored—and curious,” Cujo replied, “And too—Boomer was likely craving an ale, sort of like that wine you have in your cup.”

“Maybe we should ride to Brewster’s Corners,” Chris thought out loud.

“All of us,” Linda added, “Maybe McGinty is looking for hired-guns. I’ll send Ghost-Dog Kai to tell them to get ready.”

Episode 2—Scene 3—Outside of the cabins of Forest Road… The hired-gun hopefuls were saddled-up, and ready to ride, “I sort-of like the thought of being the bad guys for a change.”

“Me too, Linda,” Chris agreed. 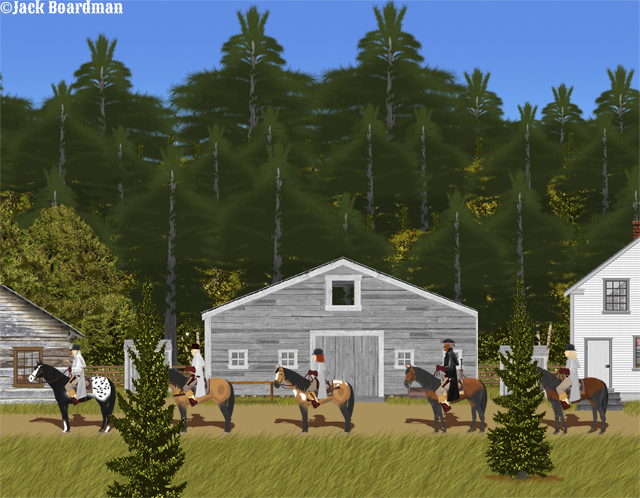 “Me too, Linda,” Chris agreed.

“This is something, that since I’ve been with you, I’ve not had the pleasure of letting my bad girl persona loose,” Debra was grinning as she spoke, “This could prove to be fun!”

Kai returned and said, “Boomer & Joey said that McGinty is looking for gunslingers!”