“You now take orders from me.”

PREVIOUSLY: The hired-gun hopefuls were saddled-up, and ready to ride, “I sort-of like the thought of being the bad guys for a change.”

“This is something, that since I’ve been with you, I’ve not had the pleasure of letting my bad girl persona loose,” Debra was grinning as she spoke, “This could prove to be fun!”

Kai returned and said, “Boomer & Joey said that McGinty is looking for gunslingers!”

Season 15—Adventure 9—SEVEN—Episode 3—Scene 1—Inside the Brewster’s Corners Saloon & Café… “We have five friends—all of them experienced gunslingers—you might be interested in hiring,” Joey suggested, “Unless you think women can’t handle shooting-irons.” 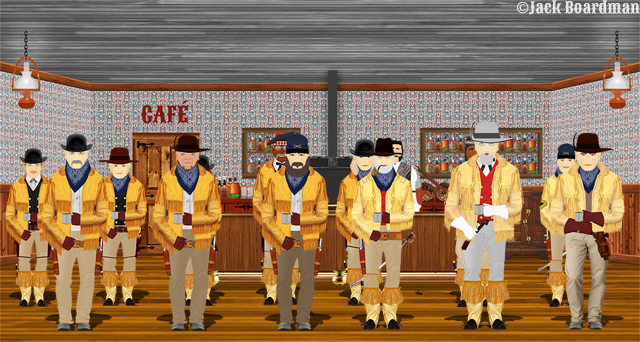 “Interesting,” Sean McGinty was intrigued, “As long as none of them are Lacey Dalton or Calamity Jane—we had some trouble with them.”

“Nope,” Boomer replied, “Chris Shouse, Linda Bryant Halvorson, Debra Wennen Miller, and Sarah Cooper. Each are the equal, or near equal to Lacey and Jane.”

He didn’t finish his sentence before both Joey and Boomer had their Remington .44s pointed at his head.

“Good,” Joey replied, “Please keep something else in mind—even though you’re the boss—we won’t be crossed. Got it?”

“Our loyalty to you,” Boomer added, “Depends entirely on your reciprocation of that loyalty. Do I make myself clear?”

McGinty felt fear rising at the words spoken by an old man as he could see the cold steel in Boomer’s expression, “You have.”

Joey grinned, “And if you think Boomer is dangerous—wait until the women get here.”

Looking at Alfonso and Andrew, Boomer said, “You two have been quiet—do you have anything to add to this conversation?”

“Greetings, gentlemen,” Linda grinned, “It appears clear that Captain Boomer and Sar-Major Jerkovich laid the groundwork for us to take-over this operation—any objections?”

“I’m his boss,” Linda’s smile was—wicked, “You now take orders from me.”

Major Beau Tarrant Beauregard, and his aide-de-camp, surprised all as he walked into the saloon.

(Major Beau Tarrant Beauregard, late of the Confederate Cavalry Corps, Army of Northern Virginia, had—like so many others, both from the north, and the south, went west after the Civil War ended.

Major Beauregard recruited former Confederate soldiers. They were easy to recruit. They soon wore-out their welcome in El Paso—went to Colorado.

“May I ask who is in charge?” Beauregard asked.

“That would be me,” Linda replied, “But, perhaps you’d rather speak with Captain Boomer, he’s my military attaché.”

“Captain Boomer, will you accompany me and my attaché, Lieutenant Dawson outside?” Beauregard asked, “And bring your Sergeant-Major along, please.”

Episode 3—Scene 3—Outside Brewster’s Saloon & Café… “What kind of experience do you have, Captain?” Beauregard asked Boomer.

“Sar-Major Jerkovich and I served in Brackett’s Battalion, Minnesota Volunteer Cavalry—and were in several battles: Killdeer Mountain, Two Hills, Little Missouri River – sometimes called the Battle of the Badlands, and the rescue of Fisk’s Emigrant Train. Sergeant-Major Jerkovich served with me throughout the war.” 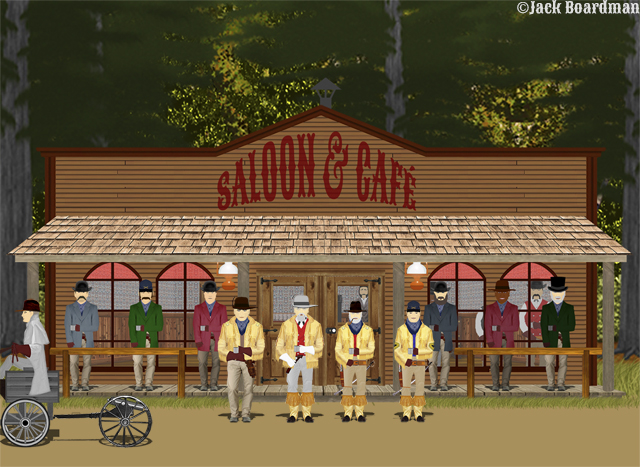 “Our major was killed, and I took over,” Boomer laughed, “But I was never promoted.”

“Typical army!” Beauregard laughed, “No matter which side one served.”

“My plan is to take the train to Deadwood, and then ride to Driftwood on horseback.”

“Why not? That’s far faster than riding.”

“Yes—it is. But as soon as you book passage—the stationmaster will notify Wild Bill Hickok in Deadwood,” Boomer replied.

“And he’ll tell him you’re coming,” Jerkovich added, looking at the horse-gun at the end of his column, “With artillery. Get rid of that gun.”

“Very-well,” the major said after considering what Boomer said, “Where?”

“I’m sure Brewster’s Corners would love a spiked gun to display in the town square.”

6 Responses to “You now take orders from me.”