“The name is Shouse, Chris Shouse—any idea which way they went?”

“Not for sure, but I heard something about Moosehead County—if that helps.”

“It does,” Wyatt Earp, IV, replied, “And it spells trouble for our county.”

Episode 1—Scene 3… Inside the Bad Girls Lakeside Cabin… Kim Swanson, Karen Claus, and Radiant-Dove White Eagle were now “legally” known as Louisa & Anna James and Susan White-Eagle—it would take a deep investigation to determine their name-change had happened at all. Their identity change had been performed in their old hideout in Albert Lea in southern Minnesota—as had converting their ill-gotten financial gains into “old wealth.”

Yes, GENTLE READER, they are that good at being bad. 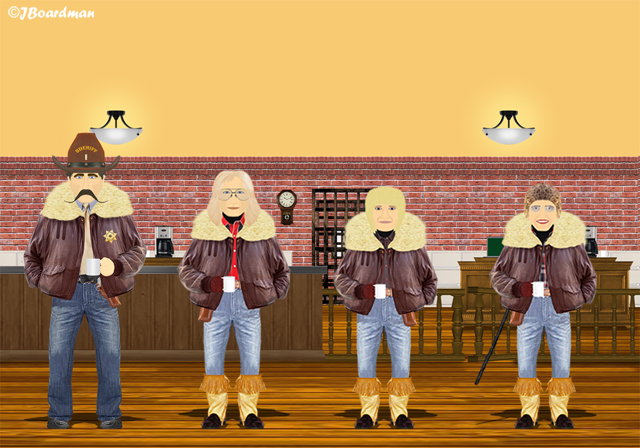 “I agree, Andy,” Wyatt replied, “But, I believe they’ll come back here.”

“We can only hope they get too cocky and make a mistake,” Chris added.

“The reserve deputies can take a few days off—Wyatt? You get a day off.”

Episode 2—Scene 2… Farkleberry’s Auto Sales… As Chris & Wyatt arrived at Farkleberry’s—Wyatt received a call from the sheriff, “Sorry Wyatt, I need you to respond to a disorderly conduct call at the Lakeside Bar.”

“I reckon I have a couple of cars you might like, Chris,” Farkleberry said, “Mebbe even a truck.”

“A truck would be handy—if it has a hitch.”

Lar left for a few minutes and returned with a 1936 Ford pick-up truck. 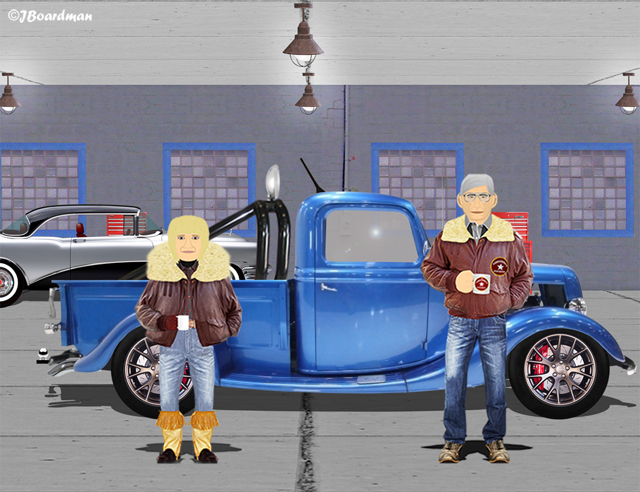 “Oh—I LOVE this!” Chris exclaimed, “How soon can you get it equipped with the lights, siren and other sheriff’s equipment?”

“Give me an hour,” Farkleberry replied, “You can wait in the lounge.”

“Not a problem, Lar,” she replied, “I can amuse myself that long.”

Farkleberry returned in less than a half-hour, “All ready for you, Chris.”

Chris had just about the widest grin on her face as she ever had, as she drove away.

Episode 2—Scene 3­­­… Inside Louisa, Anna and Susan’s Cottage… The three were about to check-out their new personas—perhaps take a drive along County Road 61 and into Danger Bay… 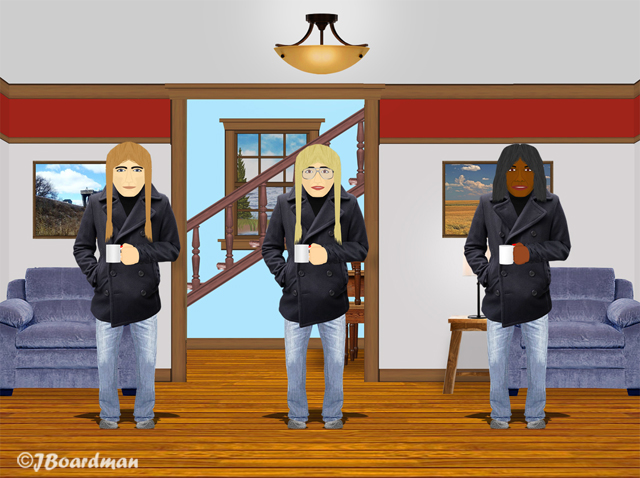 The three were about to check-out their new personas…

4 Responses to Chris fell in love with the truck.