“Come in here and meet our new friends.”

“You will, one at a time, be sent out to the boondocks to visit the dive bars you find—and just watch the patrons. After a while you’ll see people who really don’t belong in that kind of bar—those are the ones you should chat-up—because they simply don’t fit-in.”

“Just like we don’t fit-in,” Louisa added, “And too—we may be approached as well.”

“This could be fun,” Anna concluded.

To say these two young women were smart—would be an understatement, and Pettersen knew to watch his own back.

On the other hand—he was paying them a small, but significant fortune.

“A-HA!” Louise exclaimed, “Before you get any idea that you can divide us by getting romantically involved with the other—forget about it—it’s just not going to happen. You’re old enough to be our grandfather!”

“How did you know what I was thinking?”

“We can read you like a grade-school book,” she replied, “Now would be a good time to make us full-partners.”

“No matter what I suggest—that’s all customers want—go figure,” Joey replied.

“It IS good stuff,” Boomer laughed, “You could do worse.”

Season 17—Adventure 1—Pettersen—Episode 2—Scene 1… In Pettersen’s Office… [Author’s note: We’re going to leave Posse heroes for the time-being—to set-up Pettersen’s new crew. The posse will continue to meet over breakfast at Silverthorn’s Café and lunch (Gratis on a Portis with Escofier Sauce) at Joey’s Place—while his twin second in commands find new henchmen].

“Okay ladies,” Pettersen gave-in, “Your terms are acceptable—but, screw me over and I will take you out.”

“I don’t think that’s a credible threat,” Louisa grinned, “You would gain nothing by doing-so—and you’d be alone in your quest.”

“Ah—but it is ‘credible,’ as I am not alone,” Neil Pettersen wickedly smiled, “I too—am a twin. Bill? Come in here and meet our new friends.” 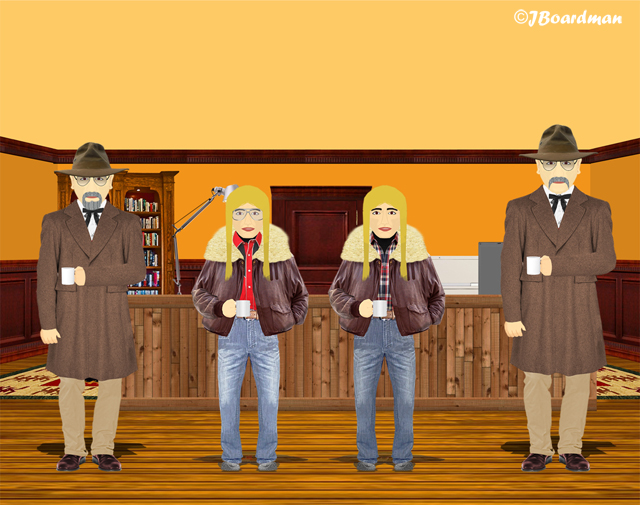 “Come in here and meet our new friends.”

“Hello girls,” William Pettersen presented himself, “I will follow one of you in your quest, and Neil will follow the other. Neither of us will interfere with your operation—unless one or both you two mess up.”

“In that case, ‘termination of employment’ takes on a whole new meaning,” Neil grinned.

6 Responses to “Come in here and meet our new friends.”