“Relax guys—we’re erasing her memories of you.”

Previously: “Okay ladies,” Pettersen gave-in, “Your terms are acceptable—but, screw me over and I will take you out.”

“I don’t think that’s a credible threat,” Louisa grinned, “You would gain nothing by doing-so—and you’d be alone in your quest.”

“Ah—but it is ‘credible,’ as I am not alone,” Neil Pettersen wickedly smiled, “I too—am a twin. Bill? Come in here and meet our new friends.”

“Hello girls,” William Pettersen presented himself, “I will follow one of you in your quest, and Neil will follow the other. Neither of us will interfere with your operation—unless one or both you two mess up.”

“In that case, ‘termination of employment’ takes on a whole new meaning,” Neil grinned.

Bill kept his distance as Louisa went to work. 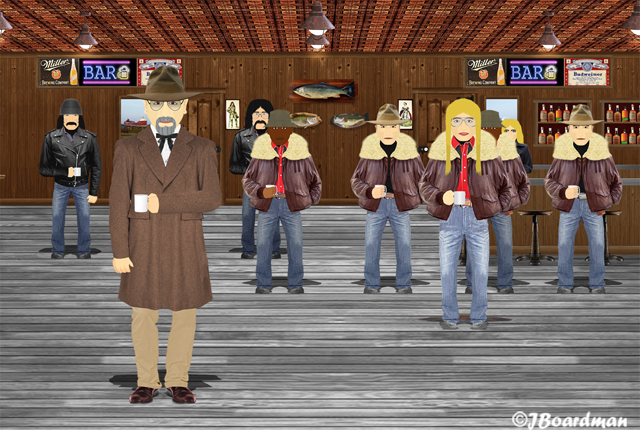 Bill kept his distance as Louisa went to work.

She surprised him when she began talking to the rather ordinary-looking men at the bar—rather than the bikers.

“I can see you’re armed, buddy,” Louisa said, “You’re not thinking about making a withdrawal, are you?”

“Because this is Moosehead County—home of the most effective law-enforcement in the entire state.”

“You have a better idea?”

“Yes, I’m going to shake your hand with a business card in my hand,” She replied, “Go someplace private to look at it. If you, and any people you trust, are interested, give me a call.”

­­Episode 3—Scene 2… At the Roadhouse Bar & Grill… “We finally escaped ‘Joey’s Place,’ with our lives—and the incessant ‘Gratis on a Portis with Escofier Sauce.’ I simply can’t stomach that stuff.”

“Geeze, Joey,” Boomer laughed, “It’s your place—serve something else!”

They both jumped—a little—when both Cujo & Mattie partially appeared next to them, “Relax guys—we’re erasing her memories of you.” 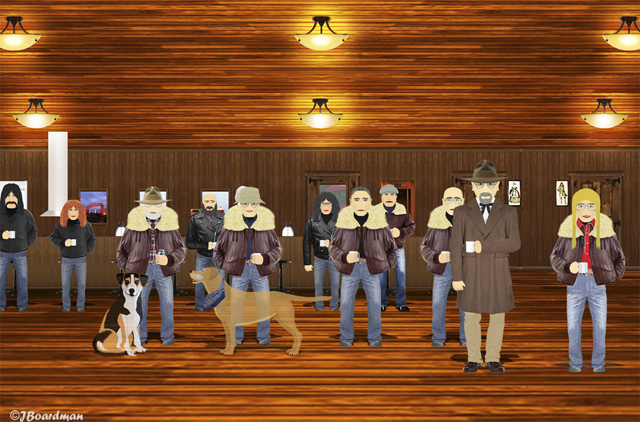 “Relax guys—we’re erasing her memories of you.”

“Uh—thanks Cujo!” Boomer exclaimed, neither he nor Joey recognized Anna as she had significantly changed her appearance.

“They’re hiring those guys standing next to you,” Mattie added.

“That’s right,” Cujo agreed, “You two may be offered a job as well.”

5 Responses to “Relax guys—we’re erasing her memories of you.”