Previously: Episode 4—Scene 2… Inside the Sheriff’s Office… “Joey and Boomer have been hired by the newly formed Pettersen-James gang right here in Moosehead County,” Sheriff James Silverthorn announced, “I’ll need to activate you folks as reserve deputies. You will be tasked with keeping-track of their whereabouts.”

“How exactly,” Chris asked, “Should we proceed?”

“First—we should get Mac hired,” Jimmy replied, “Since he’s been out-of-town since September. Mac? Go to Lakeview City and just hang-out.”

“On it, Boss,” Mac rumbled—with his deep voice—it’s the only way he CAN speak.

“The rest of you spend a little time in, and around Lakeview City, but don’t linger. It would also be wise to use your personal vehicles.”

“We just hang-out a bit,” Debra observed, “Maybe at the Codger Café, and then move-on.”

Season 17—Adventure 1—Pettersen—Episode 5—Scene 1… Inside the Lakeview Tavern—the next day… Big Mac was almost immediately approached by William A. Pettersen after arriving inside the bar, “You, sir, appear to be ex-military—is that correct?”

“Retired Sergeant-Major Carl McIntyre, at your service.” Mac replied, “What can I do for you?”

“Tell me about yourself,” Pettersen replied, “How’s life after retirement?” 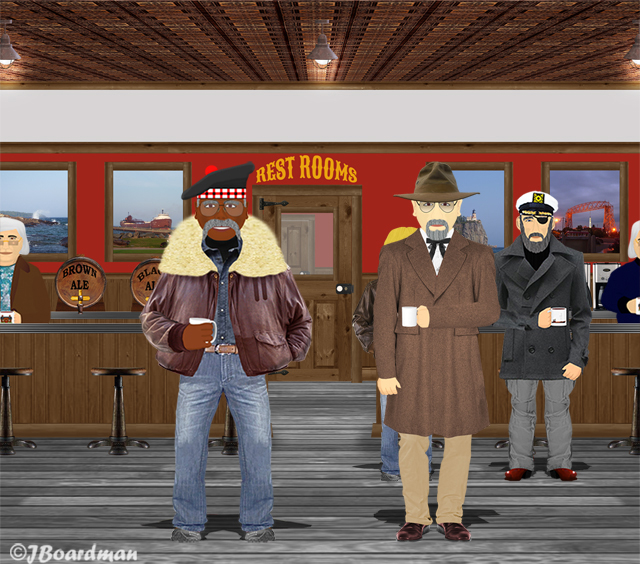 “Well, after I left the army, I worked twenty more years at the Ford plant down there in Saint Paul and then retired when the plant closed, and then moved up here. Since then my wife left me for a younger man—been jailed a few times for beating-up an ass-hat or two, and now I can’t find work to save my life.”

“Wow! What kind of question is that?” Mac replied.

“I’m sorry, but I’m looking for someone for a special project that sometimes requires that sort of thing,” He replied, “Very hush-hush—but important.”

“In ‘Nam it was part of my job,” Mac said, “Not that it matters all that much to me—but are we talking legal work?”

“Meet me in my office at the other end of downtown in a half-hour—you’ll need to meet my brother as he runs our operation.”

Episode 5—Scene 2… Inside the Codger Café… Chris and Linda decided to stop at the Codger Café—where they found Jay Merton working the counter, “It’s been a while.” 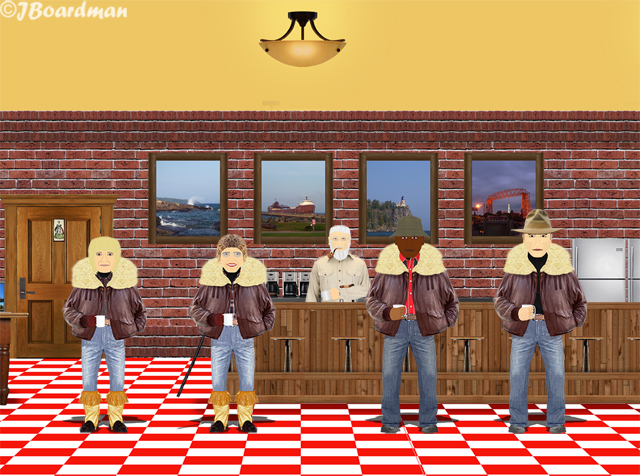 “Jay, please. ‘Mr. Merton’ is what bill collectors call me.”

“What’s for lunch?” Chris asked—making note of the others in the café, “I’m hungry.”

6 Responses to “How’s life after retirement?”