Previously: “In ‘Nam it was part of my job,” Mac said, “Not that it matters all that much to me—but are we talking legal work?”

“Meet me in my office at the other end of downtown in a half-hour—you’ll need to meet my brother as he runs our operation.”

Episode 5—Scene 2… Inside the Codger Café… Chris and Linda decided to stop at the Codger Café—where they found Jay Merton working the counter, “It’s been a while.”

“Jay, please. ‘Mr. Merton’ is what bill collectors call me.”

“What’s for lunch?” Chris asked—making note of the others in the café, “I’m hungry.”

Season 17—Adventure 1—Pettersen—Episode 5—Scene 1… In Pettersen’s Office… Joey and Boomer were both a little surprised when Neil Pettersen asked them to meet him in his private office, “I liked the way you handled your ‘interview’ the other day.”

“That’s gotta be a first for me,” Joey cracked, “Usually I can’t get past the ‘hello’ part of an interview.”

“That’s mostly because you’re a smart-assed ne’er-do-well,” Boomer laughed, “He gets us into trouble constantly.” 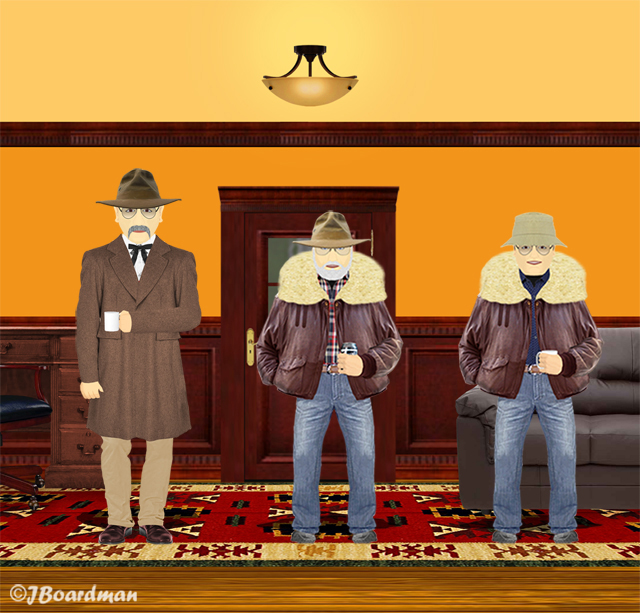 “He gets us into trouble constantly.”

“What kind of trouble?” Neil asked.

“Oh—good!” he replied, “That can be good for employee morale.”

“What do you have in mind, Mr. Pettersen? Boomer asked.

“Each of you will supervise a team of operatives. These fellows are criminals, and good at their jobs—none have been arrested in Moosehead County.”

“Absolutely not,” Pettersen replied, “No closer than Duluth.”

Episode 5—Scene 2… Inside the Codger Café… Chris & Linda stopped into the café, and were surprised when Cujo appeared, “Cujo—what’s up?” Chris asked.

“People-dogs Boomer & Joey have been assigned by the Pettersen brothers—with their teams to go to Duluth and Superior and rob banks.” 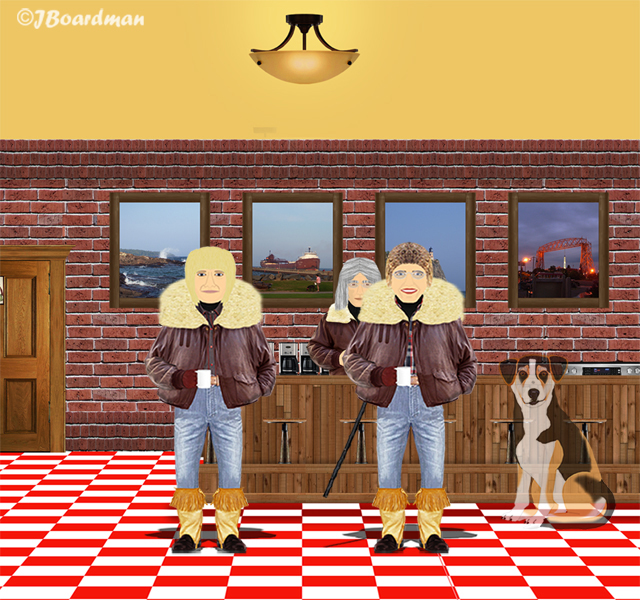 “No, it isn’t, but you must leave now to set-up the banks to be ‘robbed’ by providing bags of marked bills to selected banks while I tell the boys which ones to rob.”

“Indeed, the list is in your cars—leave as soon as you can.”

An hour later—they were on the road.