Previously: “Excuse me, Boss,” the woman also manning to “Ops-Cen” asked, “Could I be relieved for a few minutes—there are no restrooms here.”

“That’s because you two are permanently part of this image—and you really never need to go to the bathroom.”

“What? What about you—you’re here?”

“How is this possible?”

“I’m a real-world friend of the guy who makes these images.”

“I’d have said something a bit stronger,” Boomer laughed.

“I’m a Marine—trust me, the urge was strong back when I was in Korea, and if I controlled that then—it’s easy now.”

“We’d better head for home,” Linda wasn’t happy, “Why is it something always comes-up here in the cyber-world?”

Season 17—Adventure 3—SCRAMBLE!—Episode 10—Scene 1… at the Recreational Air Force airfield office… The surviving pilots, Richard Jones, Donald Samuels, Clyde Hosfield, Will Brickman all were there, and the Commander, Dennis Wiggins laid-down the law, “Gentlemen—you will take this training very seriously. Our opposition, we already know NOW, are very-accomplished aerial warfare pilots. I admit I didn’t take them seriously, and as of right now—you WILL take our training seriously—GOT IT?”

“YES SIR!” They exclaimed in unison. 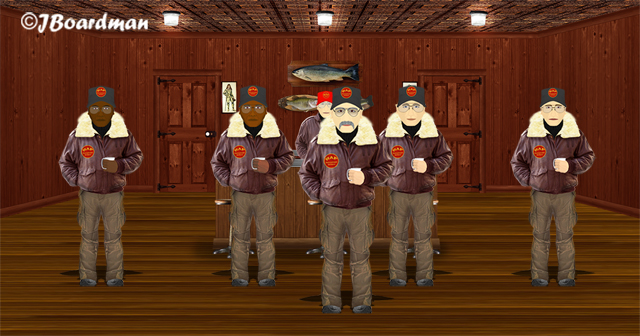 Wiggins was the only member of his bunch who had combat experience—the others were relatively good pilots, and able to be trained.

He also knew he had to expand his operation—but how?

Wiggins had an idea—but it was a long-shot.

He called Clyde Barrow, the commander of the “Me 262 Squadron,” based at Holman Field in St. Paul, “Clyde—how would you like assert your Second Amendment rights?”

“Hey, Denny,” Barrow replied, “Good to hear from you. Of course, I would—and do every day.”

“With your Messerschmitt 262 planes?”

“I have fifty-caliber MGs to spare,” Wiggins replied, “So arming them is no problem. I’ll send you decals to place on the top of your plane’s tails. “Welcome to the Recreational Airforce.”

“We’ll leave as soon as we apply the decals. It will be great to put these old warriors back in service.”

And so, this Adventure ends… But our story? Will Be Continued…